Thursday night the eyes of the NBA were focused on the Bay Area, as were ours. Here’s a recap of what you should have learned from the Thursday night slate of games around the league.

1) Golden State is figuring everything out, Kevin Durant is unstoppable, The Destructor’s form has been chosen. So much for that slow start to the season…

Kevin Durant is not going to be able to change the narrative this season — for many fans he is a traitor to a small market team he helped build, he took the easy path to a ring (as if there is an easy path), the Warriors are the villains — but that doesn’t make the potential in Golden State any less real. The Warriors unleashed the full force of their machine on the previously undefeated Thunder Thursday night, and it was an awesome show. Oklahoma City was basically Alderaan. A fired-up Durant was everywhere, scoring 39, hitting seven threes, and playing strong defense.

By the way, Oklahoma City had the best defense in the NBA as of Thursday morning, and Golden State just toyed with it starting in the second quarter — OKC had allowed 88 points per 100 possessions through four games, the Warriors put up 123. It wasn’t just KD, the Warriors kept getting Steven Adams switched onto Stephen Curry, then Curry would blow by him and get the shot he wanted. A lot of Warriors got the shots they wanted.

More importantly, the Warriors are playing strong defense again. Russell Westbrook was just 4-of-15 shooting, as a team the Thunder shot 40.2 percent (with a true shooting percentage of 48.3, well below average). Look at OKC’s second-quarter shot chart (hat tip Nate Duncan), and notice the shots at the rim. 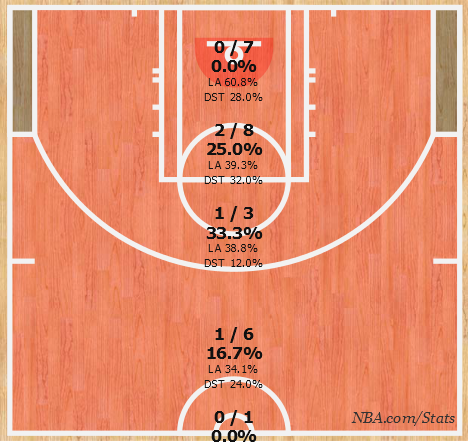 When Golden State plays like this, when focused and motivated, maybe one or two teams in the NBA stand a chance to steal a game. To win four-out-of-seven against the Warriors when they play like this… good luck with that.

3) LeBron James is 5-0 to start the season for the first time in his career. One team that looks like a threat to Golden State is in the East — the defending champs and the NBA’s only undefeated team. Cleveland brushed aside a short-handed Boston team Thursday (no Al Horford or Jae Crowder), and Cleveland seemingly has picked up right where it left off last season. Don’t take my word for it.

#Celtics HC Brad Stevens: "This is the best I’ve seen (#Cavaliers) play in November. They’re way ahead of where they’ve been at this point."

LeBron was the ridiculous version of himself we’ve come to take for granted — 30 points, 12 assists, seven rebounds — but what has been most impressive is that for much of this young season he has pulled back. As he has done the past couple of seasons, we see a largely restrained LeBron during the regular season as he paces himself so he can unleash his full force in the playoffs. The difference has been that peak Kyrie Irving — playing with a post-Olympics bounce — and the rest of the Cavaliers have stepped it up. Tristan Thompson was a force against the Celtics, with 15 points on seven shots, plus 14 boards. Oh, and he did this to poor Tyler Zeller.