LOS ANGELES — This game was not a thing of beauty. The video is not headed to Springfield.

When two teams expected to be in the league’s top-10 in defense meet, it often isn’t, but this was uglier than anticipated. The Sunday matinée at Staples Center was physical, it was slow paced, it was workmanlike, it was at times sloppy.

And the Clippers will take it.

Los Angeles won 88-75 in a slow, grinding, defensive game. The Clippers improved to 2-0 on the young season, while the Jazz fell to 1-2 with the Spurs on the road next on the docket.

You know it’s a rough game when this is the winning team’s shot chart. 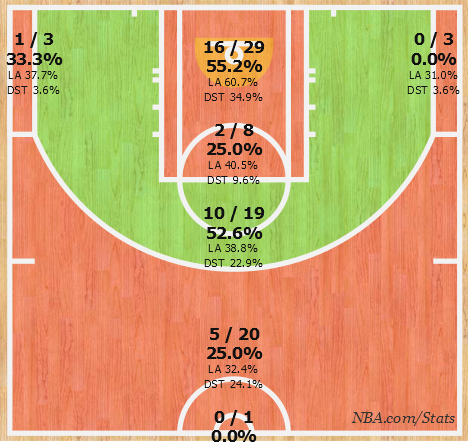 The Clippers defense was the difference.

“I thought our defense was terrific,” coach Doc Rivers said. “We were very physical, you know, two games in a row our physicality has been something you would notice. When (the Jazz) miss that many shots and they only have seven offensive rebounds, with the type of rebounding team they are, that’s great.”

Credit the Clippers’ defense, but it’s a two-sided coin.

Watching the Jazz offense without Gordon Hayward‘s shot creation is like watching Sisyphus. It’s not the effort, they simply don’t have the players. Against that physical defense of Los Angeles Utah shot 39.7 percent and had an offensive rating of 83.6 percent.

Boris Diaw, in particular, struggled, not scoring in his 18 minutes and getting pushed around by Griffin much of the night. Snyder said he is battling through injuries.

The Clippers got a third-quarter scare when DeAndre Jordan reached out for a loose ball and his hand was hit by George Hill. Jordan instantly grabbed his right hand in obvious pain, the Clippers called timeout and Jordan went to the bench. It was a sprained right thumb, and while Jordan did return to the game Doc Rivers said postgame there was swelling and the team would X-ray the injury to make sure it wasn’t anything worse. (UPDATE: Those X-rays were negative.)

This was obviously going to be a strange game just by the vibe in Downtown Los Angeles Sunday — Los Angeles’ Comic Con was taking place across the street from Staples Center. Cosplay was everywhere downtown — I parked next to an SUV where the entire original cast of Donkey Kong got out.

It was the kind of sloppy start often seen on NBA Sunday day games, when rhythms and routines are thrown off by the sun still being out. The Clippers and Jazz combined to shoot 13-of-38 in the first quarter, it was like watching the Knicks’ version of J.R. Smith on Sunday days.

The Clippers were able to take a small lead in the second quarter, mostly due to getting to the free throw line more often, 10 offensive boards, and a dozen efficient points from Blake Griffin, but it was only 42-35 at the half.

Clippers start the second half on 7-0 run, and they stretch the lead out to double digits — which was more about the Jazz offense than the Clippers’ scoring. As Los Angeles upped its defensive pressure, Utah had few answers. The only thing that broke the scoreless drought was Rudy Gobert outran DeAndre Jordan down the floor and got a bucket early in the offense. The Clippers held that double-digit lead most of the third, and it was 69-56 Los Angeles after three.

From there, the Clippers got enough shots to fall — and Utah could not — to get the win.

Austin Rivers led the Clippers with 19 points off the bench. George Hill led the Jazz with 18 points and Dante Exum had 10 off the bench, while Derrick Favors, trying to return from injury, was 1-of-8 from the field.