OAKLAND — All series long, the Cavaliers have struggled to stop the Warriors’ offense.

Without Draymond Green, the Warriors couldn’t stop the Cavaliers’ offense.

The result was an old-fashioned, fast-paced shootout (102 possessions, the most in this series) — and in that setting, LeBron James thrived on his way to 41 points. He set the tone with aggressive, attacking play on both ends. Kyrie Irving, not seeing Green every time he tried to drive, felt comfortable and hit inside and out, and racked up 41 of his own and put on the best display of his career on the biggest stage he’s ever been on.

The Warriors couldn’t keep up that pace (3-of-21 from three in the second half), and the result was a 112-97 Cavaliers win that sends the series back to Cleveland for Game 6 Thursday. Golden State still leads the series 3-2.

Kyrie Irving and LeBron James combined to score 72 percent of the Cavaliers’ points. Add in assists and they combined to generate 98 of the team’s 112 points. They are the first teammates ever to both score more than 40 points in the same NBA Finals game.

“They had two great games, two breakout games,” Cavaliers coach Tyronn Lue said. “We need those two guys to give us confidence early, and they both did that.”

“At this point, it’s whatever it takes,” LeBron said of playing a larger role in the offense. “Obviously making shots and things of that nature are something that you sometimes really can’t control. Sometimes the ball go in; sometimes it don’t. How hard you play, how locked in you are on the keys to get a victory.”

LeBron has been aggressive driving the lane all series, what was different in Game 5 (besides Green not being there to protect the rim) was that his jump shot fell with regularity. All series long the Warriors have been going under picks, backing off, daring LeBron to shoot jump shots, and for the first time this series he made them pay. Here is his shot chart on the night: 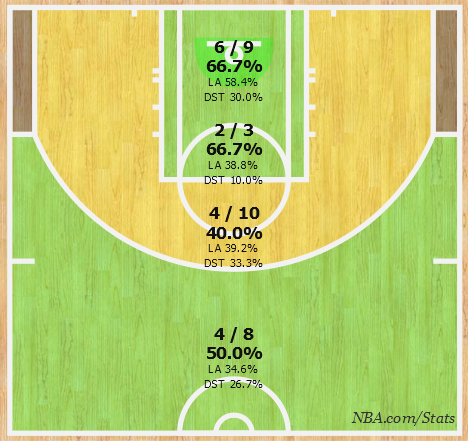 Irving was efficient all night long — 17-of-24 shooting, including 5-of-7 from three. He made tough shots, he created space, he played well in transition, and was the best player on the court in the fourth quarter when the Warriors tried to make a comeback.

“Kyrie was great tonight, he had my number,” Klay Thompson said after the game.

Led by those two, the Cavaliers were attacking from the start but gained confidence as the game wore on and they felt more comfortable. No Green played a role in that, but it was not the entire story.

“We weren’t very good defensively,” Warriors coach Steve Kerr said. “We obviously knew we were without Draymond, so there’s no point in harping on that. We had to play better, and we didn’t. Both those guys played terrific games, shot the ball well. I thought our defensive communication was lacking. We had some plays where we didn’t pick up in transition, and we had some cross matches that we didn’t identify and they got free, especially Kyrie, and made a lot of shots in transition where we just weren’t there.”

The Warriors came out with defensive intensity early with a couple of strips inside, pressuring LeBron who started 0-of-2, but he found his jump shot stroke early and went 2-of-2 from three, plus hit some mid-rangers in the first quarter. The Warriors got the lead up to seven, but mostly it was a close first quarter where Cleveland shot 52.6 percent but were undone by eight turnovers. It was 32-29 Warriors after one.

Cavaliers opened the second quarter on a 7-0 run but the Warriors closed the gap because Klay Thompson flat out could not miss — he had 18 points on 5-of-5 shooting in the second alone. But the Warriors had seven second quarter turnovers and that undercut Thompson’s shooting. So did the fact LeBron (25 first half points) and Kyrie Irving (18 points on 8-of-10 shooting) were red not, feeling the freedom of no Green switching on to them. It was 61-61 at the half.

In the third quarter, Andrew Bogut went down with what looked like an injury that will have him out for the rest of the series. Bogut rotated over and rejected the layup of a driving J.R. Smith, but the collision left him in pain below the basket, grabbing his left knee in obvious pain. Play continued for a minute before Kerr called a timeout.

Golden State could not hit their threes and close the gap, with Cleveland pulling away and extending the series. The Cavaliers won the first of three they need to win. The Warriors remained confident.

“Well, we’re in the same place we were last year, up 3-2 heading back to Cleveland,” Kerr said. “If you told me this before the series, I would have taken it. So we’re in a good spot. We’re disappointed we didn’t win tonight, but, like I said, they outplayed us.”