OAKLAND — Cleveland’s plan going into Game 2 was to play faster to get easy buckets, move the ball, and score better in the paint.

While they are not out, the Cavaliers are now down 0-2 in the NBA Finals to a very confident Warriors team just playing at a higher level — particularly on defense. It’s hard to see how Cleveland wins four of the next five games.

“I thought early we did hit first. I just thought when they went to the small lineup, their small lineup was a lot faster than what ours was,”Cavaliers’ coach Tyronn Lue said after the game. “Being faster and being longer and athletic gave us some trouble. It gave us some problems.”

This time it was Draymond Green who led the way with 28 points — including going 5-of-8 from three. Stephen Curry had 18 points but was limited by some foul trouble, while Klay Thompson added 17. Neither Splash Brother has had a breakout Finals game, and yet the Warriors are 2-0 having outscored the Cavaliers by 48 points.

Playing fast is the Warriors natural state of being, their comfort zone, and after a sluggish first quarter the tempo of the game picked up in the second just like Lue wanted — and that’s when the Warriors started to pull away. The Warriors defend better at pace than any team in the league. They are used to defensive cross matches and switches — they do it all season long — and they know how to protect the rim even while scrambling. It worked, Cleveland was 20-of-44  shooting in the paint for the game, and they again got bogged down in isolations when trying to exploit switching mismatches. The Warriors can defend isos if they see them coming, and Cleveland is telegraphing theirs. The result is this shot chart. 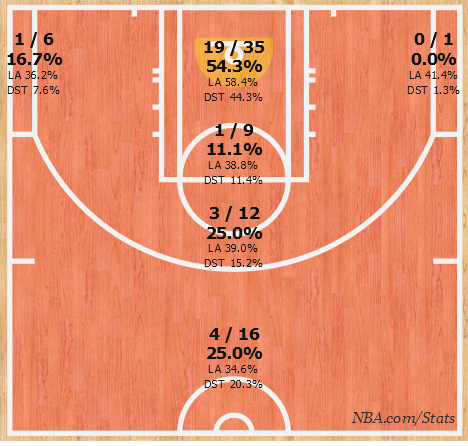 And offense is not even the Cavs biggest problem in this series.

On the other end, Cleveland knows they should switch everything against Golden State (they saw Oklahoma City do it), but they lack the discipline and communication as a team to pull it off consistently, they lack the athletic defenders of OKC, and the Warriors eventually start to carve it up. There were moments where Cleveland defended in Game 2 like they will need to if they want to make any kind of comeback in this series. They simply can’t sustain it.

Then once the Warriors momentum gets rolling, it’s over.

“Whenever we make a run they stay the course, and whenever they make a run we get erratic a little bit,” J.R. Smith said. “They’re just a better team right now.”

LeBron James — 19 points on 17 shots — is clearly frustrated, in part with himself and his seven turnovers. Last season he tried to put the less healthy Cavaliers on his back in the Finals, and that was not good enough. This season he is supposed to have help, but the Cavaliers as a team shot 35.4 percent and only veteran Richard Jefferson showed the kind of fight this team needs much more of.

“I’m not disappointed in our guys or frustrated,” LeBron said. “We’ve just got to do a better job. We’ve got to be better at all facets of the game both offensively and defensively, both physically and mentally. They just beat us at every — we didn’t win anything. No points of the game did we beat them in anything.”

The Cavaliers may also have lost Kevin Love — he suffered a concussion from an inadvertent Harrison Barnes elbow, which had Love in the locker room most of the second half. He is now in the NBA’s concussion protocol, meaning he has to pass a series of tests and levels just to be able to play in Game 3 (or any future game).

What ended being a Warriors blowout didn’t start that way.

There was a sluggish first six minutes to the game, with the Warriors missing threes (they started 0-of-5 from deep) and the Cavaliers not playing with the pace or ball movement Lue preached between games. Both teams shot less than 40 percent in the first quarter. The Cavaliers had a small lead early thanks to offensive rebounds giving them four second chance points, but the Warriors responded thanks to them taking over control of the boards — Golden State had seven offensive boards in the first quarter. The Cavaliers ended the first on an 8-2 run and led 21-19 after one.

In the second quarter the tempo picked up — and so did the Warriors. Cleveland was much more active defensively, which got them some transition buckets. But they can’t sustain that level of defensive focus, and when the breakdowns came the Warriors exploited it — Draymond Green was 3-of-5 from three in the second quarter, the Warriors liked the tempo and got into their natural state, and led by 15. The reasons the lead was down to 52-44 at the half was Curry picked up a third foul, and when he sat Lebron led a 7-0 run to end the quarter, a run fueled by the Warriors missing some wide-open threes.

While the game was still close, Golden State was getting good looks, winning the 50-50 balls, and it felt like they could blow it open at any point — and they did in the third outscoring Cleveland 30-18 behind 10 more points from Green and 9 from Thompson.

“I think our focus has been there,” Green said. “We’ve really locked in on the game plan. The intensity level has been there, and most importantly we’ve gotten it done on the defensive side of the basketball. To hold this team to 77 points, that’s a very good ballclub, that’s not something that’s easy to do. But we really locked in. We stuck to the game plan, and we’ve been able to do that.”

Once the Warriors’ train started rolling, Cleveland could do nothing to slow it.

Can slow it at Quicken Loans Arena is the big question? They need to in Game 3 or this series is all but over.