For seven games the athleticism and improved defense of the Oklahoma City Thunder smothered nearly everything Golden State tried to do inside the arc. The Thunder length and aggressiveness had them owning the paint and dominating the glass much of the series. Oklahoma City outplayed Golden State below the arc all series long.

But the Warriors owned the three ball.

“They beat us from the 3-point line the last two games, we beat them from everywhere else,” Kevin Durant said after Game 7.

After a rough shooting first half (again), the three balls started to fall for Golden State in the second half of Game 7 Monday — many of them contested, the Thunder defense remained stout. The Warriors opened the game 2-of-6 from three, then hit 12 of their next 24 — 10-of-20 in the second half — while the Thunder missed 13 straight at one point.

The Warriors made 10 more threes than the Thunder in Game 7 and — just as it was in Game 6 — that proved to be the difference. The Warriors came from down 3-1 to win Game 7 96-88 and take the series.

Golden State will host Cleveland in Game 1 of the NBA Finals on Thursday night.

“I knew we were ready for the moment,” Stephen Curry said after the game. “I knew we were a mature basketball team that tried our best to not listen to the noise outside. Six or seven days ago when we were down 3-1 everybody thought the wheels were falling off and it was the end of our run, but not the locker room. The talk was positive, it was let’s figure this out, let’s go out and take it one game at a time, claw our way back into the series, and see what happens.”

It took the best run of games these Warriors have put together in two-plus seasons — a stretch that included a championship and 73 regular season wins — to get past OKC and back to the Finals. The Thunder’s improved defense and great scoring  forced the Warriors to find another gear.

But Golden State always had the three ball to bail them out. Look at their shot chart from Game 7. 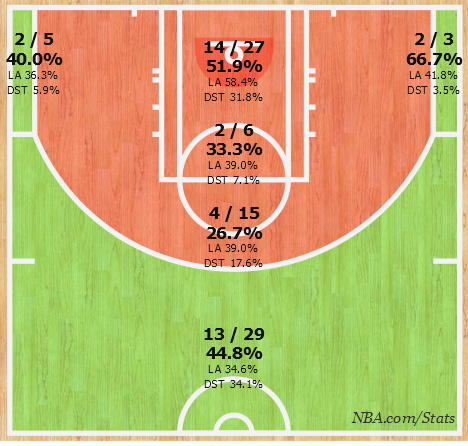 Curry, who finished with 36 points and hit 7-of-12 from three, was the difference as he played like the MVP version of himself. That version had been held in check much of the series by the Thunder’s defense, and likely a lingering knee issue (although he would never admit that). All series long Curry had struggled to beat the Thunder bigs who switched onto him off picks, but not in Game 7 when he hit four threes over those bigs, and blew by them and into the lane a host of other times.

“I could tell in Game 6 that he was starting to feel like himself,” Warriors coach Steve Kerr said after Game 7. “He looked better. He looked like he was moving better. I told our coaching staff yesterday, I have no doubt Steph’s going to have a huge game. That’s just who he is. And he looked right again.”

Kevin Durant was giving up the ball and finding teammates early in the game, trying to get others involved, but late in the fourth he put together a personal 7-0 run that made it a four-point game inside three minutes. Durant was a beast and finished with 27 points to lead the Thunder. Russell Westbrook added 19 points and 13 assists. They just didn’t have the threes to keep up with the Warriors.

Early on it in Game 7 felt like it might be the Thunder’s night. It was a disjointed start to the game (as often happens in Game 7s), which helped Steven Adams get a couple of buckets and had the Thunder trying to move the ball. Both teams had jitters and guys are trying to do a little too much, evidence by Curry starting 3-of-8 and Thompson 0-of-4. What OKC did was get six offensive boards in first quarter, which had then up 24-19.

In the second, Waiters came in and played a little out of control but proved to be a spark that had the Thunder pushing the lead up to 13. The Thunder also got solid play early from Enes Kanter, who had eight points and four rebounds in eight minutes. Meanwhile, the Warriors were missing their twos — started 6-of-20 inside the arc — but unlike Game 6 they were missing their threes as well. Play Thompson started 0-of-7.

Then Thompson hit three in a row from beyond the arc, the Warriors’ energy returned, and they went on 11-2 run to make it a game again. Thunder responded with 7-0 run of their own. Then Warriors have 7-0 run to get it to five. By the half, it was 48-42 Oklahoma City.

Golden State came out gunning from three to start the second half and behind a few Curry threes went on a 15-4 run and the Warriors were up 57-54. The Thunder hung around but got sucked into the wrong style of play and they missed 13 consecutive threes at one point. The threes were falling for the Warriors, the Thunder could not buy a bucket, it was a 29-12 third quarter for the Warriors and they were up 71-60. The Warriors felt in control.

“I actually thought we got some good looks,” Thunder coach Billy Donovan said of the third quarter. “I thought we really, really good looks. They made some shots… I liked the way we played on offense tonight, we moved the ball and played the right way…..

“We were right there every step of the way with them, and this was a record setting team, and a team that’s won a world championship. So you can sit there and say what happened, but you’ve got to give them credit. Give them credit.”

But the Thunder played too hard and too well this series to go quietly into that good night. Durant made his push, they crashed the glass, they defended with heart and made plays down the stretch. A foul by Serge Ibaka on a Curry three may have sealed the Warriors fate — a four-point game became seven, and that was too much to overcome.

Because the Warriors threes kept falling no matter what.