There are no more secrets. There are no major adjustments — at this point both teams know what they want to do and what the other team will try to do, it’s a simple matter of execution. Except it’s not going to be that simple. Here are seven questions that will shape the outcome of Game 7.

1) Are the Thunder moving the ball or relying on Kevin Durant and Russell Westbrook too much in isolation? Don’t take my word for it that the past couple of games the Thunder have fallen back into bad habits, listen to coach Billy Donovan from after Game 6: “That hasn’t been us the last month and a half. Thought we got a little stagnant coming down the stretch.” The Warriors are a good a defensive team — with good man defenders like Draymond Green and Andre Iguodala — and if you’re predictable you’re defendable. The Thunder have become predictable and isolation heavy, especially when games get tight. That works during the regular season — they have Westbrook and Durant after all — but they need to do better in Game 7. The Thunder must move the ball, the best barometer of that is whether Dion Waiters and Andre Roberson are getting touches and points. If so, the Thunder are much harder to guard and much more likely to win. 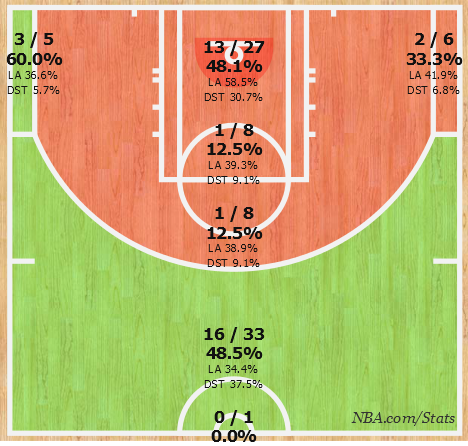 Golden State shot just 48.1 percent at the rim and were 2-of-16 from three feet to the arc. The Thunder blocked 10 shots and grabbed 16 offensive rebounds — on a lot of levels did a lot of what they needed to do to win. The Warriors three-point shooting — particularly Klay Thompson and his record 11 threes — wiped that out. If Golden State is hitting from deep, they are next to impossible to beat. The Thunder need to chase Warriors’ shooters off the arc, then say a little prayer the Warriors don’t just keep hitting from deep anyway.

3) Which small ball lineup wins the battle? For most of this series, the Thunder had out Warriored the Warriors — Oklahoma City’s small lineups (where Durant plays the four) had outplayed Golden State’s small lineups. It seemed foolish to call the Warriors small ball lineups the “death” lineup, except that it was getting them killed. Golden State needs Andrew Bogut this series. That said, in Game 6 the death lineup — Curry, Thompson, Iguodala, Harrison Barnes, Green — was +12 in 11 minutes. It worked again. Both teams are going to go small for stretches, whichever team has more success doing so will have a huge leg up in this game.

4) Which team controls the glass? Oklahoma City is the naturally better rebounding team, arguably the best rebounding team in the NBA, with a big front line of Steven Adams, Serge Ibaka, and Enes Kanter (plus Westbrook is a great rebounder for his position, as is Roberson). However, in the Warriors three wins they are +4 total on the glass — they have either hung with or bested the Thunder on the boards. Golden State needs to have that rebounding focus again (while still finding a way to get out in transition) and limit the Thunder’s second chance points — if OKC can dominate the glass they will be flying to Cleveland for Game 1 Thursday.

5) What random role player steps up with a huge game? It’s a Game 7 tradition: Some player nobody expects ends up immune to the pressure and has a big game. Stars can get tight standing in this bright a spotlight, and role players can win the game for their team. Will it be Iguodala making it happen on both ends for the Warriors? Will it be Waiters knocking down threes? Will Shaun Livingston have the game of his life? Maybe it’s Kanter’s night. Somebody is going to step up.

6) Is Stephen Curry the MVP version of himself? Is Kevin Durant? In Game 6, Curry was just okay in the first half, and the Thunder were up by double digits and seemed in control of the game for much of the first 24 minutes. In the third quarter Curry scored 11 straight Warriors points in one stretch, then in the fourth he had a couple of key threes and had the ball in his hands making plays when the Warriors pulled ahead and won. That Curry needs to show up again, and not just for part of the game. Credit the Thunder defense for making Curry struggle — their smooth switching on defense with long and athletic players — has given him fits. But no defense can contain Curry when he’s on (and healthy, which I’m still not convinced he’s 100 percent).

Kevin Durant was 10-of-31 shooting in Game 6 — he was off, and like any shooter that did not stop him from firing away. That’s the mentality he needs to have, that also cannot happen in Game 7. The Thunder need the MVP Durant (and the good Westbrook) to fuel their offense — he has to be scoring, he has to be passing when the double comes, he has to play great defense. He has to be an MVP.

7) Can Oklahoma City get over the disappointment of not closing out the series at home? Game 6 was a punch to the gut of the Thunder. That was their chance to close out the Warriors at home, Oklahoma City controlled the game early but never could put Golden State away, then got beat in the fourth when Klay Thompson got hot and the Thunder became predictable. Durant said Sunday that if they enter the building Monday acting like it’s a funeral, they will lose. He’s right. But can they forget about Game 6 and get back to the things that got them a 3-1 series lead, or is their head still going to be in Sunday night, especially the first time something goes wrong?