Stephen Curry wasn’t hitting threes like the video-game version of himself (the one we have come to expect), so he attacked the rim and made plays in the paint. The result was 31 points on 20 shots — and he set the tone for the Warriors all night.

Not just on offense, Curry had a key steal plus blocked a Kevin Durant shot late — highlighting an improved Warriors defense.

“I thought he looked like 91 percent,” Warriors coach Steve Kerr joked about Curry after the game (referencing the report Curry is just 70 percent healthy).

Curry played better than he had since Game 2 — so did Draymond Green, who had some offensive struggles but played the defense we know. The Warriors also got 27 points from Klay Thompson, and 15 points plus a lot great play in the paint from Andrew Bogut allowing the Warriors to stay with bigger lineups. Also, with Golden State attacking the rim, they got to the free throw line 34 times.

Now the biggest test of the season comes for the Warriors — they will need to play better than this Saturday on the road in Oklahoma City to force a Game 7.

The best way to describe Curry’s night was “good enough.” Credit to him attacking when his threes were not falling, look at his shot chart on the night. 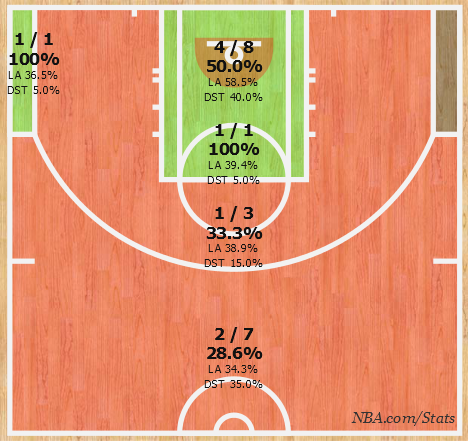 The Warriors also took the Thunder out of what had been successful for them the past couple games — OKC had just 15 fast break points (compared to 28 for the Warriors), the Warriors were +18 on points in the paint, and the Warriors outrebounded the Thunder on the night. The Warriors didn’t overthink their defense on the Thunder in this one, they just did a better job of executing switches and, thanks to Bogut, taking away easy buckets inside.

Russell Westbrook and OKC struggled out of the gate — as a team, they shot 8-of-28 in the first quarter and at one point Westbrook missed 10 shots in a row. The Warriors were not hot with their typical shots — 2-of-10 from three — but they were getting to the rim and finishing better inside, which got them a lead in a game where Oracle Arena is rocking.

Steve Kerr did not dramatically change what had worked so well for Golden State all season, counting on his team to just be better — and it was, they outscored the Thunder small-ball lineup 20-15 in the first half (after being destroyed by it in the previous two games). The Thunder hung around in the second thanks to mid-range jumpers (5-of-7 in the second, plus 3-of-5 from three). But the Thunder did not get the same lift from their stars, Kevin Durant had 15 first half points on 15 shots, Westbrook had 13 on 14 shots (but still had six assists). Golden State led 58-50 at the half.

The Thunder opened the second half on a 9-2 run and things yo-yoed between tied and a small Warrior lead for much of the second half, until the Golden State’s bench pushed the lead into double digits again late in the third and early in the fourth. That lead held until the six-minute mark in the fourth quarter, when the Thunder went on an 8-0 run fueled by some sloppy Warriors turnovers.

But the Warriors showed more poise than they have in the past few games, holding on for the win, making plays at the end when they needed to.

Now, can they do that and better on the road?