The Warriors had withstood the early explosion of the Thunder at home, hit a few threes and the game was tied 40-40 in the second quarter. It looked like we could be in for a contest that went down to the final seconds.

Then Oklahoma City’s defense started getting in the heads of the Warriors shooters, and it snowballed — especially after the Thunder became motivated by a Draymond Green kick to the groin of Steven Adams (which drew a Flagrant 1 foul). The Thunder’s small-ball lineup of defenders were cutting off Warriors drives and passing lanes, challenging shooters, the Warriors rushed shots, then the Thunder took the misses and got out and ran. It snowballed, the Thunder role players suddenly couldn’t miss, while the Warriors became frenetic and lost their poise (for the second time this series).

The result was a 32-9 run that became a 52-19 run and stretched into the third quarter. To the delight of a raucous Oklahoma City crowd, the Thunder ran the Warriors out of the building winning 133-105.

Oklahoma City now leads the series 2-1 with Game 4 Tuesday night in Oklahoma City. That game becomes vital for Golden State, which can’t afford to go down 3-1, it’s hard to picture them winning three straight in this series.

While the point totals are impressive — Kevin Durant had 33 on 15 shots, Russell Westbrook had 30 on 19 shots — it was the defense from both teams that turned this game. As it did in the second half of Game 1, the Thunder’s length and athleticism clearly bothered the Warriors — and it was the starters and the Warriors’ small-ball “death lineup” that were the biggest problems. The death lineup was -22 on the night and was on the wrong end of the Thunder’s big run. Green was -43 on the evening, Klay Thompson -41, Stephen Curry -39.

“I think it was like 40-40…” Warriors coach Steve Kerr said postgame. “We put our starters back in and they stopped moving the ball, we were taking quick shots that was just feeding their transition. It wasn’t so much turnovers as bad sh0ts, quick shots, we weren’t forcing them to defend at all. That’s death here because this team is so athletic, and on their home floor they are going to push the ball like crazy.”

The Thunder continue to switch the pick-and-roll, but where the Warriors usually use that to pick apart mismatches and move the ball they haven’t done that against the Thunder, instead just jacking up isolation shots. The Thunder’s athleticism plays into that.

Those Warriors’ starters got frustrated with their offense and allowed that to affect their defense — this was the worst transition defense we have seen from Golden State in the Kerr era. Golden State players didn’t get back on defense, or when they did they looked like little more than traffic cones for Westbrook, Dion Waiters, and other Thunder players to drive around. The Thunder players’ eyes got big and they just kept attacking.

Oklahoma City had their confidence by the third quarter and even though the fast breaks were fewer, they were still hitting everything. This is the Thunder shot chart from the third: 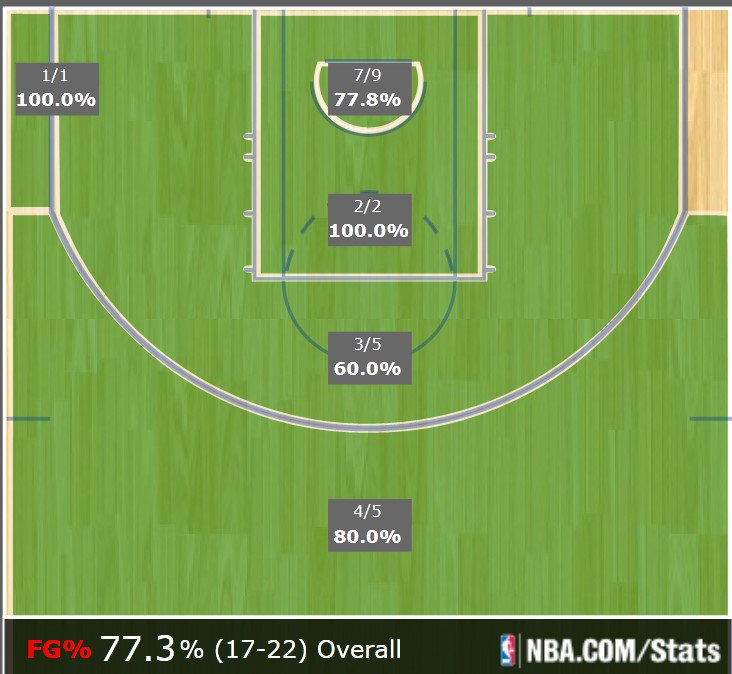 The Warriors have made a point this series of not guarding Andre Roberson because he’s not a threat from the outside — he was 3-of-5 from three and hit 5-of-9 overall for 13 points. It was that kind of night for the Thunder, who were led by Durant and Westbrook they went into attack mode and just steamrolled the team in front of them.

Stephen Curry had 24 points on 7-of-17 shooting, 3-of-11 from three. Klay Thompson added 18 points. Besides their big two, the Thunder also got 14 points from Serge Ibaka and 13 from Dion Waiters.

Much of the postgame talk was about the Green shot to Steven Adams’ groin, and whether it was intentional. I think the referees got it right with a flagrant 1 call, and Green may be writing a check to the NBA because of it. But I don’t think it warranted a suspension — and it gives Thunder fans someone to boo in Game 4.

Draymond denies he intentionally kicked Adams: "I'm sure he wants to have kids one day, I'm not trying to end that on the basketball court."

The Warriors are down 2-1 and while Game 4 is not a must win, it’s close to it for the Warriors.

“We were down 2-1 twice last year, in Memphis and in Cleveland, both times we were blown out in Game 3,” Kerr said. “We have that memory. I’m confident we are going to come out and play a really good game in Game 4.”

They need to, they need to get their swagger back, or this season will end much sooner than the Warriors expected.