There is a moment in nearly every NBA playoff series when a coach knows he’s in real trouble and starts throwing crazy lineups at the board trying to find anything that works.

That was Gregg Popovich by the end of the first quarter Thursday night. After the Spurs team got off to an early lead — and Tim Duncan was 3-of-3 from the floor — Popovich went to his bench and the wheels came off. To put it kindly. This was more like a 14-car pileup. Desperately searching for anything that worked, Popovich played a lineup that hadn’t seen a minute all season: Kevin Martin, Manu Ginobili, Kyle Anderson, David West, and LaMarcus Aldridge.

It didn’t work. The Thunder went on a 42-12 run across the quarters, and that was the ballgame.

After a season where pundits — myself included — said OKC was a step behind the Spurs and Warriors, the Thunder passed the test against San Antonio, beating the Spurs 113-99 Thursday to win the series 4-2.

The Thunder will travel to the Bay Area to take on the Warriors starting Monday night.

The fourth quarter of the game felt nostalgic for fans because this may have been Tim Duncan’s final NBA game. While he’s made no announcement (and he may well not even know what he wants to do yet), there was a sense around the league that he could, and Manu Ginobili would, walk away after this season. Whenever he does retire, Duncan will go down as the greatest power forward ever to play the game — a five-time NBA champion with unquestioned Hall of Fame credentials. We just got done celebrating Kobe Bryant‘s amazing career, but Tim Duncan’s resume can stand next to Kobe’s with pride (Duncan was far more consistent).

“Timmy, he was playing really well so we played him as much as we could because he earned the minutes,” Gregg Popovich said postgame.

But Duncan and the Spurs exited this season on a rough note.

The kind of game and series win that might have Kevin Durant thinking “there’s no place like my current home.”

After a blowout loss in Game 1, the Thunder defense tightened up each game, cutting off passing angles and using their length and athleticism to challenge seemingly everything. The Spurs could not get comfortable, the Thunder defense got smarter and more aggressive each game, and that reached new heights in the first half of Game 6. Look at the Spurs shot chart from the first 24 minutes. 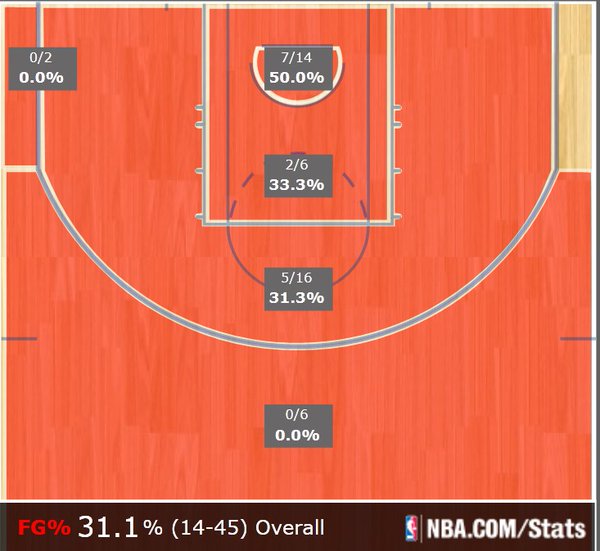 The Thunder, meanwhile, were getting the buckets they wanted against the less-athletic Spurs. Kevin Durant had 37 points on 24 shots, Westbrook 28 points, and once again the role players chipped in led by Andre Roberson with 14 points including hitting 3-of-5 from three (that’s a season’s worth of threes for him).

The Thunder led by 28 at one point and 26 early in the fourth, but the Spurs would not die. They went on a 20-6 run and got the lead down to 11 at one point, forcing Billy Donovan to put Westbrook and Durant back in to make sure this game didn’t get away from them.

The Thunder earned this series — they played their best, smartest defense of the season against the Spurs. They will need all of that and more against the Warriors.

That’s for Friday and the weekend. Thursday is for celebrating an impressive and important win for the franchise.