Toronto’s DeMar DeRozan will be a free agent this summer, an All-Star wing hitting a market flooded with cash.

But DeRozan’s shortcomings have been exposed these playoffs. While he is averaging 17.7 points per game in the postseason (down from 23.5 in the regular season) he is shooting just 33 percent overall, he’s got a PER of 9.1 (bench warmer level) and he’s been exposed on defense. His lack of a three point threat allows teams to play off him and clog the lane when he drives. Then DeRozan injured his right thumb, making matters worse. Rather than words, let’s use a shot chart to explain the problem: 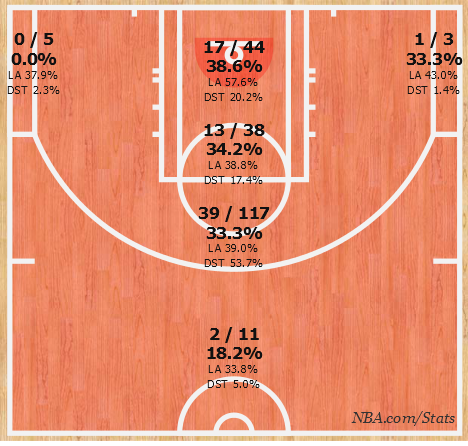 Will that impact how much money DeRozan makes this summer?

He told Michael Lee of The Vertical at Yahoo Sports he’s not worried about that.

“I feel like I have nothing to worry about,” DeRozan said of his pending free agency. “I take it day by day, whatever happens. I’m not even looking towards then. I’m thinking about the next game and trying to figure out that.”

Going into the playoffs, DeRozan was considered a max player around the league, which for him is a first-year salary starting at (projected) $25.9 million.

Is he still a max guy? Probably. Or at least very close to it. He’s an All-Star level attacking wing who is going to get a team a lot of buckets, a guy who can create his own shot and carry an offense for a stretch. And remember, two-thirds of NBA teams will have the cap space to offer a max deal, that’s a lot of money burning a hole in GMs pockets. There are obvious holes in DeRozan’s game, and you’re going to need certain things around him to maximize what he brings — wings who can defend and floor spacing shooters. But if the Raptors aren’t going to spend on him, other teams will.

DeRozan may stay in Toronto because of that value and attachment, and because they will pay him as much as anyone else. But other teams — most notably, his hometown Lakers — will come calling. DeRozan will have plenty of options.

Which is to say, all that red in the chart above isn’t going to hurt DeRozan’s grabbing the green this summer.