Indiana, Miami, and the L.A. Clippers are playing for their playoff lives tonight — can any of them force a Game 7 on Sunday? Here’s what to watch for if they are going to:

1) Can the Pacers survive a couple of minutes when Paul George gets some rest? Paul George played 41:05 in Game 6, taking short rests at the start of the second and fourth quarters. That turned out to be too much — the Pacers were -18 in those 6:55 George got a blow. During his rest at the start of the fourth, Toronto started a 21-2 run that turned their 13-point deficit into a lead. The Pacers scored just one bucket in the first 9:30 of the fourth quarter. It wasn’t just George out to start the fourth as George Hill, Monta Ellis, and Myles Turner joined him in watching the start of the team’s downfall while sitting — Frank Vogel trusted a bench that has been good to him all season, and it let him down. Check out these numbers from Game 5: Rodney Stuckey 1-of-10 (and a turnover right in front of a taunting Drake), C.J. Miles 2-of-8, and Ty Lawson was virtually nonexistent. The bench must do better for the Pacers.

Don’t expect much trust of that bench — or George to get much rest — in Game 6. This is a game the Pacers can win, but they will need more offensive balance as DeMarre Carroll continues to be physical with George. Hill, shooting 57 percent in the series, needs to be a catalyst for a little more balance in the offense. Defensively, the Pacers need to slow the Raptors successful “small” lineup of Kyle Lowry, DeMar DeRozan, Cory Joseph, Norman Powell and Bismack Biyombo — that group got stops and scored driving the lane to spark the fourth quarter run. The Raptors have struggled in closeout games recently, and the Pacers are feisty, but Indiana needs to get another big lead and not let up. They don’t want this to come down to a late Solomon Hill three again.

2) Can Miami knock down enough jumpers against Charlotte to survive another day? Forget the last play of Game 5 and if Dwyane Wade was fouled or not. It’s moot. The real question is Miami’s shooting, and sometimes a picture is worth 1,000 words (from Jesus Gomez at SB Nation): 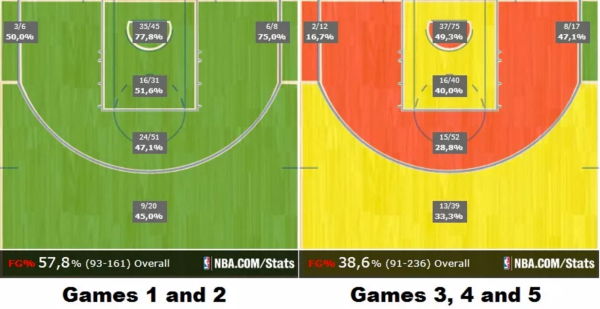 After Nicolas Batum was injured and forced to sit, Hornets’ coach Steve Clifford doubled down on his defensive strategy, went big and decided to pack the paint on defense — cut off Dwyane Wade or Goran Dragic slashing into the lane, or Hassan Whiteside on the roll, make the Heat players beat them with jump shots. It’s worked. Miami’s offense has gone stagnant. Look at the scoring at the rim the last three games — Miami is shooting less than 50 percent at the rim. Miami has been an inconsistent team on the road all season and if they don’t find a way to stop the penetration of Kemba Walker (he’s getting to his spots on the floor) and Jeremy Lin, and if they don’t hit a few jumpers, the Miami players will be golfing with Ray Allen by this weekend.

3) Can Clippers get one game-changing, series-saving night from Jamal Crawford? Or Jeff Green? Or anyone? Injuries have swung this series, with the Clippers looking like Memphis West — they need someone to step up with a big night to extend their season. Anyone. That is not going to be Paul Pierce — I know he and Doc Rivers have a history, but the game has passed Pierce by and in 2016 he should not be getting many if any playoff minutes (Rivers needs to start Wesley Johnson or someone else). Usually, I’d say look for a big J.J. Redick night, but with his heel injury his is just not moving the same way, and that has been an issue for the Clippers all series because he is central to their halfcourt offense. One little combination to watch for Los Angeles: Pablo Prigioni and Cole Aldrich had real chemistry this season and showed a little in Game 5, Rivers needs to play them together and let them find a groove.

However, with the comfort of home, expect to see more of the fourth quarter Damian Lillard— who had 16 points for Portland in that frame, part of a 37-point quarter when the Blazers pulled away in Game 5. The Clippers reserves held their own for three quarters in Game 5, but the added minutes and responsibilities wore them down physically and mentally by the fourth, and Portland just got stronger. It’s hard to see how the Clippers win this game without someone just going off in heroic fashion for a night.