The holidays are over, you’re almost recovered from New Year’s Eve and ready to start hitting the gym (that should last three weeks, admit it) — and it’s time to get back into the flow of the NBA as we run up toward the All-Star break. Here is what you need to know from around the league Sunday:

1) Jimmy Butler did his best MJ impression Sunday. Butler’s first reaction when the breaking of a Michael Jordan record came up was the one Chicago fans want to hear: “Don’t compare me to him. That’s exactly what I said. I don’t want to be compared to him.”

Jimmy Butler is no Michael Jordan, but for one half Sunday he did a good imitation of the legend. Butler started slow then had to leave the game to get stitches after an elbow from Toronto’s DeMarre Carroll. When he came back in the second half, he couldn’t miss on his way to 40 second half points. Toronto helped out; Butler was able to drive to the hoop to cleanly or get open looks, he shredded Toronto’s pick-and-roll coverage. Once he started feeling it he did not miss, check out his second half shot chart. 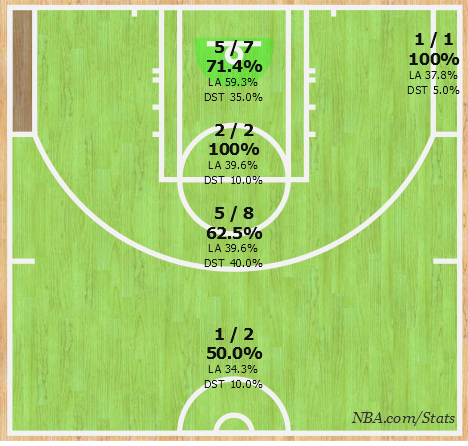 Butler was scoring, but he was doing it in the flow of the offense, he was sharing the rock off the pick, too. He helped spark a comeback in the fourth quarter — Toronto led by 15 in the third, but the Bulls ended up with the 115-113 victory on the road. For Toronto, it felt like the playoffs two years ago when Joe Johnson destroyed them. I thought Carroll was brought in to defend strong/hot wing players, but he didn’t seem to have the regular assignment (and Butler scored on him, too). And Toronto’s rim protection needs to improve as well.

2) The Phoenix Suns are a mess. The Los Angeles Lakers are tied for the worst defense in the NBA this season (via NBA.com), and the Phoenix Suns put up just 22 points on them in the first half Sunday, shooting 0-of-10 from three. The Suns shot 21 percent in the first half. For the game, the Suns shot 30.2 percent on uncontested looks (and more than half their shots were uncontested). It was ugly Sunday.

A lot of things around the Suns are ugly right now. Coach Jeff Hornacek has run out some, shall we say, interesting lineups all season trying to find combinations that work. It happened Sunday going very big with Alex Len and Tyson Chandler playing together. But nothing worked, on either end of the floor. Turns out the problem wasn’t the assistant coaches. Now, this team is spiraling down, having been outscored by 11.4 points per 100 possessions their last 10 games.

Phoenix owner Robert Sarver said on Sunday the blame for the Suns starts at the top. It certainly does. His impatience with the rebuilding process, the lack of consistency within the organization are at the heart of Phoenix’s issues. And by the way, it’s not the millennials that are the problem, the Warriors seem to be doing okay with them. It’s the older guys, and not just the ones on the roster.

On the other side, that three wins in a row for the Lakers.

3) Lakers’ fan nails half-court shot to win $95,000. Nobody around the Lakers could miss on Sunday, and that includes the fan taking the half-court shot for big cash. I wouldn’t call his form pretty, but results are what matter.

5) Knicks’ Arron Afflalo drops 38 on Hawks. He was 14-of-17 shooting overall and 7-of-8 from three. This was all about Afflalo getting open within the triangle offense then hitting his jumpers (only three of his shots were within eight feet of the rim, he hit two). This was the smoothest the Knicks offense may have looked this season, with fantastic ball movement, and Afflalo benefited (10 of his 17 shots were uncontested, according to NBA.com’s player tracking). That’s a quality win for New York and the kind they need more of if it plans to climb back into the playoff race in the East (the Knicks are currently three games out of the final playoff slot in the East).