Paul George was one of the best stories the first month of the season. He was the NBA’s Eastern Conference Player of the Month for November, and in his first 10 games he was averaging 24.3 points per game and shooting 38.3 percent from three. The old, aggressive Paul George was back.

But he has struggled of late — George is in a shooting slump. He is averaging 16.9 points per game and shooting 29.6 percent from three (and not much better overall) in his last 10 games. Check out his shot chart from those last 10: 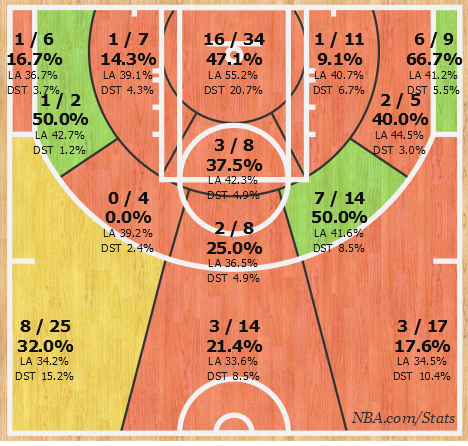 Speaking with Manny Randhawa for the USA Today, George said that after most of a season off due to leg injuries, he is feeling the grind of the NBA season in his tired legs. Plus, defenses have geared up to take him out of the picture after his hot start.

“It’s frustrating,” George said after practice Tuesday. “Given the circumstance of being out a year, that’s what I really feel like it’s been, just trying to get used to a full season now. A lot of my shots feel good; I’m still getting good looks a majority of the time. Most of them are just short. It just comes down to legs, making sure I’m sharp, making sure I’m fresh….

“We run a lot of pick-and-rolls and ball screens for me, and it almost seems like everybody’s just loading up,” George said. “Help-side is loading up, the big that I’m coming off on is no longer dropping down, he’s coming up higher (to guard George). So it’s almost forcing me to swing the ball or pocket-pass. Those are times when I’m trying to be aggressive, and I get myself in a bind trying to work through the other team just watching, just following me.”

At 18-12, the Pacers are the current three seed in the East, but things are bunched up — just three games separate two-seed Atlanta and 10-seed Detroit. The Pacers may need to find a way to rest George a little, but they ae not in a position to give away a few games to do it.

Slumps happen. Tired legs happen during the marathon of the NBA season. To everyone. Expect George to get a second wind at some point soon, and keep the Pacers in the playoff mix in the East.