For the past five games, as fans of the game we have got to witness what we hoped to see in purple and gold this seaon — vintage Kobe Bryant. The guy who can create a little space, has the legs to get some elevation, the guy that takes too many questionable shots but makes enough of them to remove the question from the picture.

In his last five games, Bryant is scoring 22.4 points a game shooting 49.4 percent, and he’s hitting a third of his threes. Against Denver Tuesday night took on a key defensive assignment (Will Barton, who had 23 in the first half) and handled it well while still scoring a season-high 31, including knocking down the dagger that earned the Lakers their first win against a Western Conference team.

Check out Kobe’s shot chart from the past five games and you see that the key difference between this and his start to the season (he shot 33.6 percent in his first 10 games) is that his midrange jumpers are now falling. 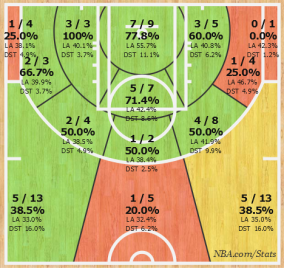 Why are they falling? Kobe told ESPN’s Baxter Holmes he feels like his legs are back under him.

It’s not a reduction in minutes per game, although he did have the game before the Lakers took on Denver Tuesday off (due to a shoulder injury). Kobe knows this is his farewell tour and doesn’t want to disappoint fans, he tries to play every night. The reality is he kept putting in the work and seems to be physically adjusting to the grind of the NBA season again. That’s letting him have some big nights.

Don’t confuse that with him changing his mind on retirement.

Kobe was asked yet again if nights like tonight make him re-think retirement. The answer is no, "not even an inkling."

I don’t know if he can sustain this, especially if defenses start to focus more on him. And I’d still question if playing Kobe and Lou Williams more minutes than D'Angelo Russell or Julius Randle for the sake of getting a meaningless win against Denver in December is the best way to develop the young players that are the Lakers’ future.

Still, as fans of basketball, what we are getting lately is all we can hope for from Kobe — some vintage games, some moments that remind us of his greatness, and fewer of the cringe-worthy moments from earlier in the season. That and let him stay healthy so he can leave walking away on his own terms at the end of the season.

It’s fun to see this Kobe. Hopefully, we get more of him this season.