Few NBA players obsess over the details and are as involved in the design of their signature shoes as Kobe Bryant. The attention to detail Kobe put in his game — polishing his footwork, watching endless hours of film — he has put into his shoes.

The new Kobe 11s — which hit stores Jan. 9 — are no different. They are all about innovation, and what Kobe wants in his shoe. From the official Nike press release.:

At first glance, the low-top and simplified silhouette appears familiar. One could be fooled into believing that they’ve seen this before. Wrong. Look closer. See those pearlescent fibers? Those are thermoplastic polyurethane (TPU) threads, an indication of progression; and, despite their subtlety, an announcement of the arrival of an evolution, a stronger iteration of Nike Flyknit.

Fittingly, this progressive technology debuts on the KOBE 11, underscoring the dedication to innovation that has cemented Kobe Bryant’s design legacy, one that rivals, if not extends, the champion’s on-court perfectionism.

They look tight. And you know Nike and Kobe are going to sell a lot of them. 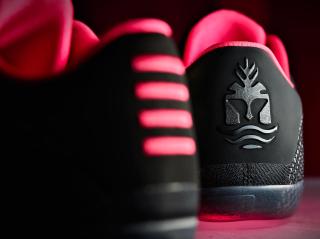