Full night around the NBA — and some of the league’s biggest names had their biggest nights — but this time of year the schedule fills up, and it can be hard to watch all the games. That’s why we’re here. If you were busy wondering what that Elf on the Shelf has really been up to and weren’t watching, here are five things you should know from the NBA Wednesday night.

1) Kobe Bryant was back. For a night. “I would hope that he has more fun, and appears less frustrated, and also gets more appreciation.” That was what Lakers GM Mitch Kupchak wished for Kobe the night he announced he would retire at the end of the season. He sure looked like he was having fun Wednesday night. This was the kind of vintage, throwback game everyone is hoping to see from him — he was going in isolation, driving into tough shots, then hitting them anyway. Kobe finished with 31 points on 24 shots, he was knocking down some threes, and with the game on the line  he was at his best. He was at the heart of a 108-104 Laker win on the road against the Jekyll and Hyde Wizards (beat the Cavs Tuesday, lose to the Lakers Wednesday).

I don’t know how much we’ll see of this Kobe this season (his shot selection was not good, he was just making them), but it sure was fun for a night.

2) Stephen Curry never left. Curry is just not fair. On the night they honored his father Dell in Charlotte, Stephen Curry went into full video game mode. He put on a show for the fans in his hometown as he led the Warriors to a 116-99 win and a 20-0 record. Not sure how to explain how well he’s playing, so let me just give you some Curry bullet points:

• He had 40 points Wednesday on 14-of-18 shooting, including 8-of-11 from three.
• That was in three quarters, he didn’t set foot on the court in the fourth.
• Curry now has six 40 point games in the first 20 games, last guy to do that was Michael Jordan (according to the Warriors broadcast).
• Curry now has made more than 100 threes in 20 games, the second fastest player ever to 100 threes in a season was Ray Allen in 31 games.
• Curry has 640 points this season on 430 shot attempts.

3) Stan Van Gundy’s search for answers nets Pistons OT win over Suns. As his team fell behind the Suns by 12 with seven minutes left in the fourth quarter, Pistons coach Stan Van Gundy said he made more in-game adjustments than he ever had.

He switched matchups. He made substitutions. He used a zone.

“What we were searching for, quite honestly, was a defensive scheme that would work with a total lack of effort,” Van Gundy said. “And we couldn’t find it. So, we just went back to our normal stuff, and guys played hard. Look, I don’t want to get going, because we won, and I don’t want this to be a negative thing.”

Reggie Jackson (34 points and 16 assists) led a 15-0 run that put Detroit up, but Phoenix re-took a two-point lead. The Suns intentionally fouled Andre Drummond (22 points and 12 rebounds) with 12 seconds left, and Drummond — a career 39% free-throw shooter — sunk both to force overtime.

Marcus Morris (24 points and 14 rebounds) also made big contributions to the win over his former team. Is this one particularly special for him?

“Of course it is,” Morris said.
—Dan Feldman

4) Chris Paul is out for a couple of games and the Clippers are not the same without him. They rarely get mentioned among the best backcourts in the game, but when Chris Paul and J.J. Redick are on the court together the Clippers score 111.5 points per 100 possessions, and outscore opponents by 10.9 per 100. Replace those two with Austin Rivers and Jamal Crawford and it’s not the same. Which is where the Clippers were Wednesday. CP3 is going to miss a couple games due to his “rib muscle” injury (probably and oblique), and Redick rolled his ankle early in the game and left. Without those two the entire Clipper team looked off, and if you do that against the hot Pacers you pay a price. They did. Indy won 103-91 (six straight wins for them)

5) O.J. Mayo cut his hair. For most of the season, Mayo’s hair looked like this. 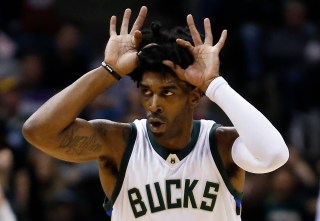 Now he’s gone traditional — and you can blame his mom.

Why did O.J. cut his hair? His mom. She'd been on him for the last month and even brought it up on Thanksgiving. pic.twitter.com/OtFGYqCF9w