Kobe Bryant is averaging 15.2 points a game at age 37. It’s just taking him 16.4 shots per game to get there. After his 1-of-14 shooting performance against the Warriors the other night — with too much isolation and too many plays run just for him — there has been a lot of talk about his shot. With reason, this is his shot chart so far this season. 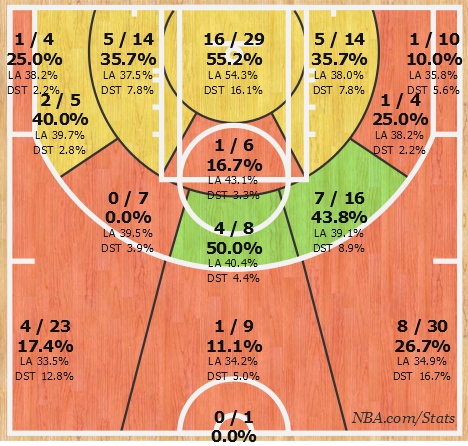 So what do the Lakers’ do? Get Kobe to shoot less and get the ball in the hands of the young stars they supposed to be developing more? Nah.

“I know his mentality is that he can still play in this league,” Scott said. “And we feel the same way….

“Obviously he’s struggling right now with his shot, and I think everybody can see that,” Scott said. “So it’s trying to get him in better position to be able to have an opportunity to knock those shots down on a consistent basis. That’s No. 1.

Yes, how could it be his legs? It’s not like he’s a 37-year-old with more than 55,000 NBA minutes played, and coming off an Achilles rupture and major knee surgery.

Honestly, I hope the Lakers and Kobe find a balance soon, because they have become just hard to watch. And I don’t want Kobe to go out this way.