Sometimes a picture can tell the story better than words.

That’s why above you can see all of Kobe Bryant‘s shot attempts against the Warriors Tuesday, a night where he went 1-of-14 from the floor (and “facilitator Kobe” had two assists). If you want another picture, here is Kobe’s shot chart for the game. 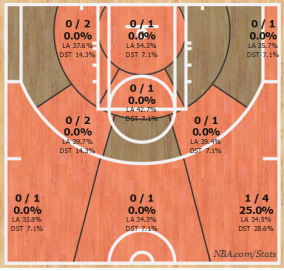 On the season, Kobe is shooting 31.1 percent overall, 19.5 percent from three, and he has a career low true shooting percentage of 41.5 percent. It’s hard to watch. On a team that is supposed to be developing their young stars, Kobe took as many shots as D'Angelo Russell and Julius Randle combined. Laker coach Byron Scott is good with Kobe doing whatever he wants.

But Kobe is worried about his shooting performances, right? Not so much. From Baxter Holmes of ESPN.

Full quote from Kobe on his shooting: pic.twitter.com/vYl9J2niru

If Kobe can figure out the Lakers’ system this season, he will be in a club of one.

I could go on a longer rant here, but the bottom line is this is just a sad spectacle to watch. And there’s a lot of season left to watch it.