The best way to view the NBA analytics movement’s feelings about the midrange jumper is to compare it to the baseball analytic movement’s feeling about the stolen base attempt — unless you’re really good at it, the risk is not worth the reward. But if you are good at it, it’s a valuable weapon. See Chris Paul, for example. The discussion is more nuanced, but that is the broad strokes of it.

Paul George takes a lot of midrange jumpers (as do the Pacers as a whole), and he is no fan of being told what a bad shot that is. Check out his quotes on analytics, via Candace Buckner of the Indianapolis Star.

“I’m not a fan of analytics,” said George, who takes 4.9 shots per game from 15-19 feet, second only to Los Angeles Clippers forward Blake Griffin for most in the NBA.

“The greatest player to ever play this game was a midrange jump shooter in Michael Jordan,” George continued. “At that time no one had nothing to say. It’s about what’s best for that player and what’s the skill set of that player. We have a lot of guys who are more than capable at shooting well from the midrange. So I don’t know what to say about analytics. It works for some systems. I’m not a believer of analytics. That’s just how it is.”

Jordan played in a different era with different hand-checking/zone defense rules, which makes it difficult to compare directly across eras — the rise of teams that love the three ball is more about those factors than pure analytics. However, the idea from the first paragraph still applies — Jordan was good from the midrange, so for him that was a reasonable shot.

Here’s the real question — is the midrange jumper one that works for the Pacers? Here is their team shot chart for this season. 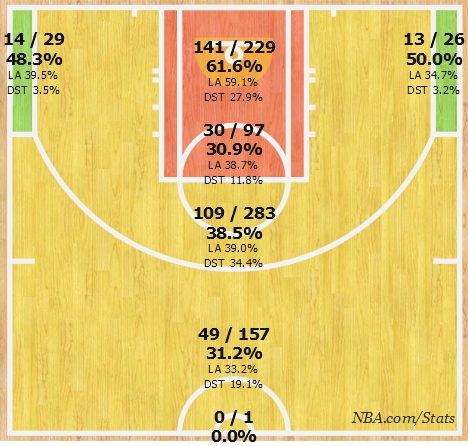 The answer to whether a midrange shot is a good one varies from shooter-to-shooter, and includes questions such as how open said shooter is, and if they are in one of their comfort zones on the floor. Look at Paul George from the midrange this season, if he’s on the left side below the free throw line, that looks like a pretty good shot. 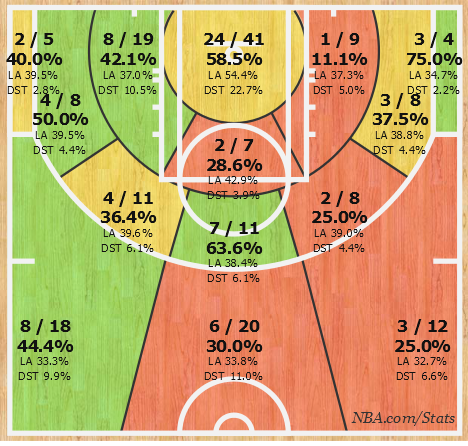 Basketball is too fluid a game to suggest all midrange shots are bad, or even that all such shots are created equal. But in the end, if you can get more of your shots at the rim or have them taken by guys with legit three-point range, you’re better off than not.