Derrick Rose is on the court for the Bulls and averaging 12.6 points per game. However, the lingering impact of the fractured orbital bone in his face that left him with double vision is evident — he is shooting 35.9 percent overall and 5.6 percent from three (you read that right, and he’s taking two threes a game). Rather than words, let’s use a picture to illustrate the problem, here Rose’s shot chart on the season. 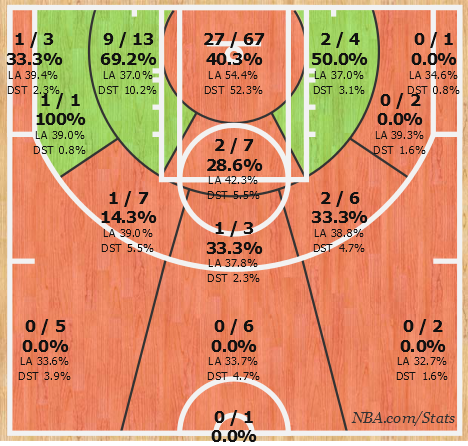 All of why this news from Bulls coach Fred Hoiberg is bad news for Bulls fans (or Derrick Rose fantasy owners), via K.C. Johnson of the Chicago Tribune.

This was news to Rose, but not shocking.

Rose said "that's first time I'm hearing about that" when told Hoiberg said his double vision could last 3 months. Did say it's still there.

Rose on his vision: "For this to be seven or eight (weeks) out and still the same way, I can’t do nothing but live with it."

The Bulls’ offense is 25th in the NBA so far this season, and while their shooting as a team is average (16th in NBA in team eFG%) they are bottom five in getting to the free throw line and offensive rebounding percentage. Hoiberg has talked of tweaking the front line rotation, mostly to improve the defense by putting Joakim Noah in for Nikola Mirotic (although I think those two should be the starters). However, what the Bulls really need is better play from their guard spots, which frankly means a lot more Jimmy Butler.

It’s a long season, but the Bulls have a lot of work to do on offense to become a threat to the top teams in the East. Rose playing better will have to be a big part of that.