PBT is previewing the 2015-16 NBA season by tackling 51 big questions that we can’t wait to see answered once play tips off. We will answer one a day right up to the start of the season Oct. 27. Today’s question:

Who will with the big NBA end-of-season awards?

Yesterday we talked MVP picks, and the entire PBT staff was on the same page — LeBron James.

Today we fan out into the other NBA end-of-season awards and the unanimity goes away. Here are our picks.

Rookie of the Year

Comments:
Kurt: Not only is he going to be the starting point guard for the Nuggets with the ball in his hands, but Mudiay also has good players around him that will keep the double-teams off him and give him options. With that he’ll rack up numbers.
Sean: Very often, this is a numbers award, and Okafor will likely average 20 and 10 on this Sixers roster.

Defensive Player of the Year 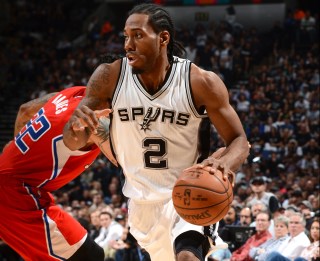 Comments:
Dan: Draymond Green deserved the award last season, because he contributed more defensively by playing 15 more games than Leonard. But Leonard was the better defender, and health shouldn’t limit him this season.
Sean: Gobert put the league on notice in the second half of last season and has quickly become a media darling. With the Jazz expected to make the leap into playoff contention, Gobert will be the frontrunner here.

Coach of the Year

Comments:
Kurt: I think the Miami Heat make a big leap back to relevant — and dangerous — playing an entertaining, up-tempo style. Spoelstra will get credit for that, just beating out Jason Kidd for the award.
Dan: Most expect the Trail Blazers to fall sharply after losing LaMarcus Aldridge, Wesley Matthews, Robin Lopez, Nicolas Batum and Arron Afflalo. If Stotts keeps Portland in the playoff race, that could get him this award.
Sean: Stevens checked all the narrative boxes — he got the Celtics competitive long before they were supposed to be, and is beloved by his players. If the Celtics stay in the playoff picture, he’ll get the votes.

Sixth Man of the Year 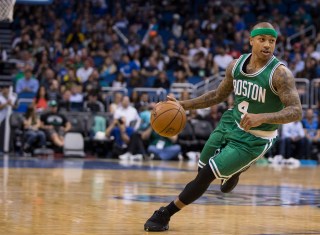 Comments:
Kurt: The Greek Freak has impressed with moments of his play and his potential the past two seasons, but this is the year he breaks out more in the public consciousness, and in the eyes of many voters.
Dan: Recipe for predicting this award: Find a player who’s quietly already good, in line for a bigger role and maybe also on the verge of real improvement.

Jae Crowder may be the most likely player to be traded at the deadline. The Suns need a shake-up (and to get Devin Booker back), and they are sitting on a $10.2 million player that is not helping them on the court and has yet to bring back any trade value they want.

We may have movement on that front, based on reports from Shams Charania of The Athletic.

In a new development, the Suns have given permission to the Bucks to meet with Crowder and they met over the weekend, league sources tell The Athletic. The Bucks are believed to be the only team that has received permission to visit one-on-one with Crowder, those sources have also indicated…

Both the Suns and Bucks have engaged in serious trade talks for months, with current proposals surrounding Jordan Nwora, George Hill, Serge Ibaka and second-round draft compensation to Phoenix for Crowder, according to sources. The Bucks and Suns have searched for a third team to provide Phoenix with a forward – so what outcome will emerge between now and next Thursday?

Those talks between the Bucks and Crowder likely focused on his role on the team this season (backup four) and possibly re-signing him after this season (he will be a free agent).

Crowder has sat out the season after asking for a trade but is still a Sun because Phoenix head of basketball operations James Jones had a very specific ask in the trade — a forward with a similar skill set to Crowder. It’s tough to trade like-for-like in the league, so nothing has happened. It’s also why that offer from the Bucks doesn’t seem the fit the Suns want. Nwora is a forward but a fringe rotation player, Hill can help with some backup point guard minutes, but nothing really moves the needle for Phoenix. The problem is the Suns have waited so long to get a trade done that Crowder’s value has gone down — by the time he is traded, works his way back into game shape, then steps on the court for his new team he’ll be lucky to play 30 games in the regular season. Teams aren’t going to give up as much for a rental.

The report states the Heat also are interested, which is not a shock they want a P.J. Tucker-like player at the four and Crowder fits the bill, but putting together a trade that works for both sides is difficult (unless the Suns suddenly fell in love with Duncan Robinson, which would be a bigger trade). The Hawks come up, but there is a growing sense around the league that the new Landry Fields-led front office is less inclined to trade John Collins, and they may ride with him at the four.

It’s likely Crowder gets traded somewhere at the deadline and the Bucks maybe make the most sense, but this deal could have been done long ago if the sides wanted to.

The WNBA champion Las Vegas Aces are about to get better.

Two-time MVP and two-time WNBA champion Candace Parker announced she plans to sign with the Aces when free agency opens on Feb. 1

The WNBA champions just got better — a starting frontcourt of Parker and reigning MVP A’ja Wilson (with Kelsey Plum in the backcourt) could make Las Vegas the best defensive team in the league. While Parker may not be the scorer she once was, she can serve as a fulcrum for the offense, get the ball to the other players on the deeply talented Aces, and make them a serious threat to repeat.

Still, a cloud hangs over the Aces organization after what Dearica Hamby alleged after she was traded to the Sparks. Hamby said she was “lied to, bullied, manipulated, and discriminated against” by the Aces front office surrounding her pregnancy and contract. Those are serious allegations, and the WNBPA is looking into the matter.

On the court (if the investigation results don’t weigh them down), the Aces have to be title favorites now. However, when WNBA free agency comes on Wednesday that could shift, depending on what Breanna Stewart chooses to do (along with other key free agents). There has been speculation Stewart could head to New York to team up with Jonquel Jones, Betnijah Laney and Sabrina Ionescu on a Liberty team that would instantly be the biggest threat to the Aces (if not the outright favorite).