The Clippers have a lot of, um, personality.

It falls on Doc Rivers to harness it, to guide it toward a common goal.

The Clippers are loaded with talent – enough to win a championship. But it’s also a combustible group. 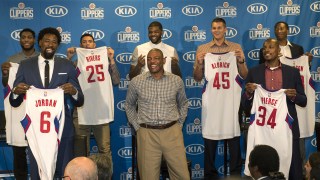 Paul, Griffin and Jordan are stars right now. Pierce has been a star, and Smith and Stephenson were on the periphery of that label. That standing naturally inflates someone’s ego, and it’s not an easy thing to reverse. And it’s not as if players like Crawford and Austin Rivers will graciously slide into the background. How much room for ego is there on one team?

If anyone can keep this team on track, its Doc Rivers. Player relations is his strong suit. His championship Celtics – with Pierce, Kevin Garnett, Ray Allen, Rajon Rondo and Kendrick Perkins – had more than their fair share of strong personalities. He has done this before, and though this challenge might be larger, he can do it again.

Keeping everyone focused begins with Rivers himself. His teams consistently rank among the NBA’s leaders in technical fouls, and he contributes plenty. Despite wishing his players wouldn’t complain to referees, the Clippers feed off Rivers emotion. It’s a fine line, and Rivers must expertly walk it.

The refrain last season was that Rivers the president made the job more difficult for Rivers the coach. This year, it’s the opposite. This is a roster that should strike fear into any coach, even if its ceiling is sky high.

Of course, Rivers knows what he’s getting into. He got himself into it.

The result could be a championship – or a lot of headaches.