If you know even the slightest thing about Michael Jordan, you knew the answer before he said it.

Jordan was doing a Q&A at the Michael Jordan Flight School in Santa Barbara, CA, and was asked (and he repeated the question), “If I was in my prime, could I beat LeBron in a one-on-one game?” He called it an “ESPN question” and then, after a short pause, gave the answer everyone knew was coming:

He’s said this before. He said the same thing about Kobe Bryant. It wouldn’t matter if he were asked about Stephen Curry or Larry Bird or one of the Monstars from Space Jam, there is always only going to be one answer from Jordan — he is ultra competitive and he believes he is the best that ever was. 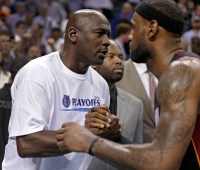 LeBron’s comment last time it came up: “I’ve thought about the matchup but no one will ever see it.”

Fans have thought about it, too — a ridiculous number think Jordan would win if they play right now. This is something people get in fights over. Obviously, we will never know the answer, but get on your bar stool and go ahead and debate it in the comments.

Jordan answers questions for about six minutes on this video about the biggest trash talkers he played against (Larry Bird), could the all-time Bulls beat the all-time Lakers (of course he thinks Bulls), and he said he’d take Dean Smith over Phil Jackson. But nothing he says is surprising or out of character. It’s just Jordan being Jordan.