It’s a common practice in the NFL draft: Teams trade down to get multiple picks. The move is almost always seen as smart. For the NFL’s annual war of attrition, having the extra bodies makes a lot of sense.

You don’t see it much in the NBA for a reason — you only have a 15-man roster and only nine of them likely play on a given night. Talent wins out, and the talent drop off going down even five or six picks can be steep. If you can get a potential star with your draft pick, you take it, he will matter far more than two guys who may be guys nine and 12 on the bench. However, there are times trading down makes sense in the NBA, if you don’t think you’re getting that star.

That was the situation facing the Hornets in this past draft. They had the No. 9 pick, and Boston wanted it (for Justise Winslow, reportedly, who fell to Miami at No. 10). Boston came knocking on Charlotte’s door with a bevy of picks, and there was a split in Charlotte about whether this was a good idea, reports Zach Lowe at Grantland. For the first time, we know what was offered, and it’s pretty impressive.

The Celtics offered four first-round picks for the chance to move up from no. 16 to no. 9: that 16th pick, no. 15 (acquired in a prearranged contingency deal with the Hawks), one unprotected future Brooklyn pick, and a future first-rounder from either the Grizzlies or Timberwolves, per sources familiar with the talks.

Some members of Charlotte’s front office liked the Boston deal, but Michael Jordan, the team’s owner and ultimate decision-maker, preferred Kaminsky to a pile of first-rounders outside the lottery, per several sources. 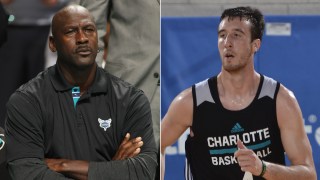 The bet Jordan made was that Kaminsky is a star. Except nobody projects him that way. He’s a quality big who can pick-and-pop and be part of the rotations, sure. He’s a solid pick. But is he better than four first round picks for a Charlotte team that needs way more talent on the roster?

This feels like something that has happened in Charlotte before: Jordan watches a lot of the NCAA tournament, falls in love with a player who performs well (Kaminsky) and hijacks the draft process. The Hornets will deny this, but it’s how it looks from the outside.

At the No. 15 and 16 picks in this draft, Kelly Oubre and Terry Rozier were taken, although guys such as Jerian Grant, Bobby Portis, and Sam Dekker were still on the board. Kaminsky is more valuable than one of them, but will he ultimately produce more than two of those guys? Plus two future picks? Not likely. Charlotte is stuck in the rut of mediocrity in the East, picking Kaminsky doesn’t move them out of this lane. Do those four picks? Maybe not, but it’s a path, a chance.

“You have two minutes to decide: ‘Do I want to do this trade?’” says (Curtis) Polk, one of five men atop Charlotte’s decision tree. “You don’t have a day. You don’t have hours. After all the intelligence we’d done, we were comfortable with Frank. But now you have two minutes to decide if you make this trade, who you’re gonna take at no. 16, or maybe no. 20, and we haven’t been focusing on that range. In fantasy basketball, it sounds great: ‘Oh my god, they could have gotten all those picks.’ But in the real world, I’m not sure it makes us better.”

Adds Rich Cho, the team’s GM: “If it was such a no-brainer for us, why would another team want to do it?”

Because Boston saw Winslow as a star, and at a position they need help.

On draft night when this came up and the rumors flew around that four picks were being offered, I said it’s tough to say what to do because we didn’t know what the picks were, how far out and how protected. Now that we do… if I were in the Charlotte decision tree I would have pushed to make the deal.

Now we all wait three years and then can look back to see who might have been right. It would have been a difficult decision in the moment, but I’m not sure Charlotte made the right call.