The playoff/tournament/whatever you call it round of the NBA Las Vegas Summer League tipped off on Wednesday. Unlike the NBA, you don’t see an increase in intensity now that the playoffs have rolled around — these guys been playing for a job, auditioning for almost a week now. A paycheck is way more motivation than the Summer League crown.

There continue to be plenty of things happening in Vegas, here’s a roundup.

• It was a scary moment when Kings’ No. 6 pick Willie Cauley-Stein left the game Wednesday limping after he banged knees with James Michael McAdoo. After a little treatment and rest he was back in — a relief for a guy who had a lot of teams concerned about his injury potential. Cauley-Stein said he just banged knees.

Cauley-Stein has looked good at times in Vegas, he is incredibly active and athletic, but he may he suffers a little from the old John Wooden line “never mistake activity for achievement.” He needs work to recognize and make NBA-level defensive rotations. That activity isn’t going to work against veterans who know how to exploit it.

“I think Willie always plays hard and he’s still adjusting to the NBA game,” Kings’ Summer League coach John Welch said. “But one thing I love with Willie is you know every night you’re going to know what you get, he’s going to give you effort.”

• The Golden State Warriors beat the Kings on Wednesday to advance to the next round of the playoffs, and the team is coming together under Luke Walton (their coach). The Warriors could pull off the never-before-done NBA title then Summer League title back-to-back.

• Sixers’ rookie guard J.P. Tokoto is going to be battling for minutes with Robert Covington, Nik Stauskas, and Hollis Thompson come the season. He gets what his role will be and that he’s going to have to earn his run this season.

“I’m a realist, I know what it is coming into it,” Tokoto said when asked if he had conversations with the team about his role. “But yeah, we have talked about it — being a defensive guy. Coming in – whether it’s garbage time or giving a vet who is playing more minutes a breather — and disrupting the other team’s offense, attacking the rim on the offensive end, offensive rebounds, being a facilitator coming off a pick, or attacking the rim like I said. Just embracing the moment.”

• And Tokoto proved he can finish at the rim.

• Ryan Boatright, who has had a good Summer League trying to make the Nets (he has a partially guaranteed deal, just a $75K buyout), left the Nets game in the first half Wednesday with a shoulder injury after he took a flagrant foul from the Sixers Steve Zach (who threw a hip into him and knocked him flat during an inbound play).  Boatright came back in and took his free throws, but this is Summer League and there is no reason to make a guy play through injuries.

• Just signed Pierre Jackson suited up for his first game for the Sixers, and his pink Kobe’s may have been the most impressive thing we saw from him. 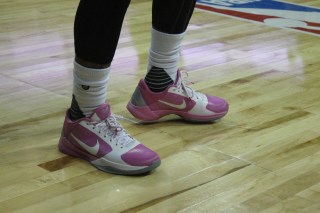 Jackson finished with 9 points on 3-of-9 shooting, and was 0-of-4 from three.

• One thing you consistently hear from college players trying to adjust to the NBA game now is the constant movement of it. With a 24-second shot clock (not 35) and a defensive three seconds in the lane call, there is just a lot more motion and quicker action even in a Summer League game.

• All the big names from Duke’s national championship team — Jahlil Okafor, Justice Winslow, etc. — were absent from Summer League on Wednesday because they were all in Los Angeles for the ESPYs. Winslow is not playing anymore for the Heat this summer; it is unclear if Okafor returns for the Sixers.