DeMarcus Cousins. Rajon Rondo. George Karl. All in the same locker room for an NBA season.

Welcome to the Sacramento Kings, who had gone hard after Rondo since July 1 and on Friday they got their man. Marc Spears of Yahoo Sports was first with the news.

This has been confirmed by other sources, with the salary being set at $9.5 million.

Rondo was a complete train wreck after being traded to the Dallas Mavericks last season.

Rondo is a high IQ player, a gifted passer and a plus defender (although his defense is not near as good as its reputation). But it his shot that is the problem, here is his shot chart from last season: 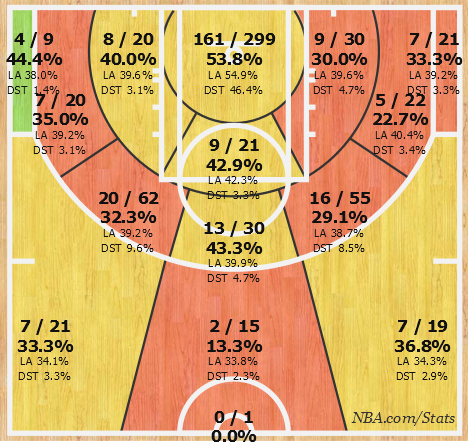 On the Kings, defenders will sag off Rondo as he goes over the pick and work to clog the lane — don’t let Cousins do his work in the paint, make Rondo (and Rudy Gay) beat you with jumpers. (To be fair, the Kings did add Marco Belinelli.) If the Kings try to play offensively-limited rookie Willie Cauley-Stein along with Cousins, it just makes things that much more crowded in the paint. And if you think Rondo is there to help push the pace, you should ask Dallas about that (the coaching staff was frustrated with how he slowed the game down).

Off the court, Rondo can be moody, competitive and combative. Rondo couldn’t get along with Doc Rivers in Boston (and everyone likes Doc). Then he melted down during the first round of the playoffs for the Dallas Mavericks and the franchise paid him to go away mid-series. So have fun with that, George Karl.

Rondo is going to Sacramento; the Kings got their man.

And they are going to be very interesting to watch because of it.