CLEVELAND — Before the start of the NBA Finals, Andre Iguodala was listed at many sports books at 150-to-1 odds of taking home Finals MVP. After starting every game of his career until this year, he didn’t start once this season until Game 4 against the Cleveland Cavaliers. He isn’t the deadly shooter Stephen Curry is, or the dynamic personality of Draymond Green.

But after the Warriors hoisted their first Larry O’Brien Trophy in four decades, he was the obvious choice. Nobody else embodies the ethos of this historic Warriors team quite the way he does.

“I’ve been preparing for this moment for 11 years now,” Iguodala said after the celebration had commenced.

Throughout his career, Iguodala’s role has been the same everywhere he’s gone. He’s the guy that gets stuck on LeBron James. It’s a mostly thankless task — James put up otherworldly numbers even as effectively as Iguodala played him. And he stepped up to take on this daunting task even after being asked to sacrifice the touches and attention he had grown accustomed to during his career. When Steve Kerr inserted Iguodala into the starting lineup in Game 4, it changed the trajectory of the entire series, and Cleveland had no counter. Iguodala’s versatility was the reason why the move worked so well.

“He stepped up,” said Shaun Livingston, another veteran who saw his role fluctuate over the course of the season but contributed valuable minutes in the Finals. “Obviously his role this series was guarding LeBron and then making shots, making plays for everybody. But to be the sixth man all year, even in the playoffs, and then come and start and turn this thing around for us, I think that defines our team. Everybody being ready. He had the hardest job probably on the floor this series trying to contain LeBron.” 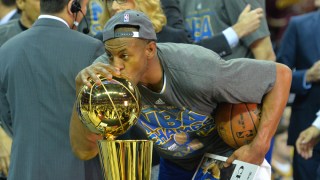 If Iguodala had done nothing on offense in the entire series, he would have been the most important Warriors player simply on the strength of his defensive effort on James. But he scored 25 points in Tuesday’s closeout game and knocked down key shots at other points in the series.

“Guarding LeBron James has to be the hardest job in basketball,” Kerr said. “So after the first three games we decided to start Andre because he was doing by far the best job on LeBron. But he was also contributing in so many other ways. Offensively, their plan was to take Steph away, take Klay away, and force Draymond and Andre to beat them, and Andre did. He hit three more threes tonight. 25 points.”

Ironically, for a team that just beat LeBron James in the Finals, the success of the Warriors is most reminiscent of James’ most successful teams in Miami. Erik Spoelstra had no qualms about starting, say, Shane Battier in one series and yanking him from the rotation entirely in the next one when matchups dictated it. Nobody can say that the Warriors would be where they are, as champions, without Andrew Bogut, but it’s equally inarguable that Golden State gained a significant matchup advantage when Bogut was all but removed from the rotation.

The Warriors similarly had the level of success that they did this season, winning 67 games, with minimal contributions from their highest-paid player, former All-Star David Lee. But Lee contributed in Games 3 and 4 when called upon. From the top of the roster down, this team had full buy-in. It’s a testament not only to Kerr’s willingness to make unorthodox coaching decisions but to the willingness of Lee, Bogut and Iguodala to make the sacrificed they did.

Which is why it’s perfectly fitting that the player who got the solo turn on the podium wasn’t the league MVP, top All-Star vote-getter and arguably the greatest shooter in NBA history. It was one of those role players whose selflessness made the Warriors’ entire system work.

“You could make an argument that it could have gone to Steph, it could have gone to LeBron,” Kerr said of the Finals MVP award. “But for us, it’s really fitting that the award went to Andre because he sacrificed his starting role from the first game of the season. He had never come off the bench once in his entire career, and he sacrificed that job to make Harrison better, to make our bench better, and that set the tone for our whole season. An All-Star, an Olympian, saying, ‘OK, I’ll come off the bench.’ It set the tone for everything we were able to accomplish, so it feels like full-circle to me that Andre received the award. Couldn’t happen to a better person.”