OAKLAND — It was evident early on it would be Stephen Curry’s night.

“I thought from the very beginning when they went small, had their shooters out there, I thought this is Steph’s night,” Warriors coach Steve Kerr said. “This is going to be a big one for him because he has all that room.  He took over the game down the stretch and was fantastic.”

Actually, you could tell even earlier than that.

More like the fourth quarter of Game 3. The Warriors lost that game, but after two-and-a-half rough games Curry dropped 17 in the final quarter that night. He had clearly put the puzzle together on the Cavs pick-and-roll defense, and what he had to do to beat it.

That knowledge peaked in the fourth quarter of Game 5 Sunday night, when Curry put on a dazzling set of moves and showed the ridiculous range of his shot dropping 17 points on 5-of-7 shooting (3-of-5 from three). He finished the night with 37 points, hit. 7-of-13 threes, and had taken the game over late.

Curry did what MVP’s do. Finals MVPs.

Like when he answered LeBron James’ ridiculous three with one of his own.

Curry had more where that came from. There was a wrong-footed layup, followed by a couple more ridiculous threes where he created just enough space to get off his shot. Call those shots lucky if you want, but then Curry has been lucky all season long.

“I mean, those are plays I’ve been making all year and the ones I feel confident in,” Curry said. “I think it helps to have gone through Game 2 where we were rushing a little bit in the same situation.  A one- or two-possession game in the fourth quarter, and we got, I call them better shots because they were more in rhythm than in Game 2… 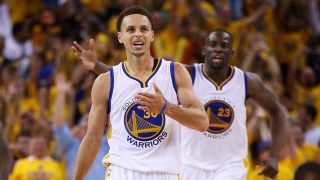 “And obviously when one goes in, it helps keep your confidence high.”

We expect Finals MVPs to give their all and Curry certainly did that. After the game, he came and spoke to the media but then told trainers he was starting to feel nauseous and was taken back to the training room where they diagnosed him as dehydrated. He got fluids (not through an IV) and will be on the plane to Cleveland Monday morning for Tuesday’s Game 6.

We also expect Finals MVPs to find motivation wherever they can — like the attention Matthew Dellavedova got as an alleged “Curry stopper.” There are no Curry stoppers.

“He made seven threes.  I don’t know, were any of them not contested, hand in his face, falling, step back off the dribble?” LeBron James asked. “I’m okay with that.  We’re okay with that.  I mean, you tip your hat to a guy who makes shots like that, and he’s the guy that can do it in our league.  He’s the best shooter in our league.”

A shooter who has wicked handles, can shoot off the bounce or catch, is a willing and quality passer knows how to lead a team, and has a high game IQ.

A shooter that the Cavaliers — like 28 other teams — have no answer for once he gets rolling.

Curry is rolling the Warriors to a title — just as he figured out how to attack the Cavs off the pick-and-roll, Golden State as a whole has figured out the Cavaliers.

And he may have figured out how to be series MVP.