Let’s start here: I don’t care one bit about the hairline of LeBron James.

But for whatever reason, it has been a hotly-debated topic among fans for several seasons.

There have been dissections of the sizes and angles of the headbands that James has worn over the years, and side-by-side photo comparisons made (like the one below from Sporting News) to try to prove that work has been done.

But in a feature story from Marc Spears of Yahoo Sports, the personal barber for LeBron swears what we’re seeing is all natural.

Barber Nick Castemanos has grown tired of getting asked over and over again about the hairline of his most famous client, LeBron James.

“There is no dye. No additives. No preservatives,” Castemanos told Yahoo Sports in a phone interview Thursday. “Everyone thinks he’s dying his hair using [temporary hair colorings] Bigen or Black Ice. It’s all his hair. They still don’t believe me. I get Bigen comments all the time.

“I’ve become numb to it. It used to bother me. It’s not easy to hear that.”

Bigen is the stuff that, when used in excess, can make you look ridiculous — just ask Carlos Boozer about that. But evidently, when used properly, it could be responsible for fixing a hairline’s problems.

Stephen A. Crockett Jr. of The Root:

In a layman’s hands, Bigen is nothing more than semipermanent hair dye. But in the hands of a master barber, Bigen becomes a fountain of inky youth applied in such a way that a razor-sharp hairline can be shaped and manipulated, or tufts of hair sprouted on the face look like a full mass of beard. Hairlines are sculpted tightly back into their starting blocks; beards become so sharply angled that pro skiers would be wary of those slopes.

It appears as though something has happened to make LeBron’s hairline snap back into shape. If it was a transplant procedure of some kind, then technically, the hair we’re now seeing on his head would indeed be “all his.”

As I mentioned at the top, I couldn’t care less about this. But for those who continue to be obsessed, you can check out the photo below and decide for yourself. 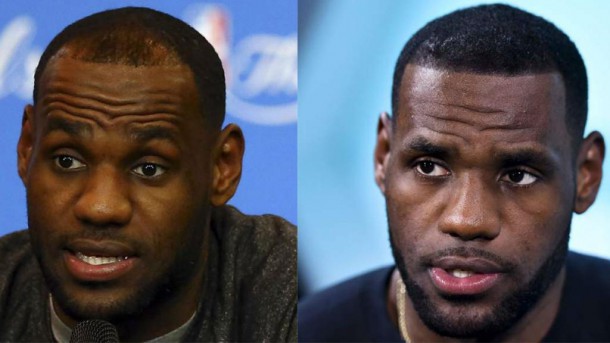