OAKLAND — Golden State plays the beautiful game — multiple actions going on at once, guys working on the weakside, a rhythm and flow that ends with some of the best shooters on the planet knocking down looks with the little bit of space created.

But the Warriors had no rhythm Sunday night — and that was all about Cleveland’s defense.

The headlines will be about LeBron James’ triple-double brilliance, or Matthew Dellavedova grabbing key rebounds, and those are key components, too.

However, it was the Cavaliers defense that has the NBA Finals knotted up at 1-1.

“I think they deserve a lot of credit for the way they played,” Warriors coach Steve Kerr said. “They got into the passing lanes. They took our rhythm away. Then we’ve got to do a better job ourselves of trying to create that pace and rhythm. We’ll look at the tape. We’ve got to put our guys in a better position to get good looks.”

The most celebrated shooter in the game, Stephen Curry, set a record for most missed three-pointers in an NBA Finals game with 13. Curry was 1-of-9 on uncontested looks in Game 2 (using the NBA’s SportsVU camera data). LeBron credited Matthew Dellavedova — Curry was 0-of-8 shooting when Dellavedova was on him.

“It had everything to do with Delly,” LeBron said. “He just kept a body on Steph. He made Steph work. He was spectacular, man, defensively. We needed everything from him…. He just did a great job. Just trying to make it tough on Steph. That’s all you can do. You make it tough on him. You get a contest, and you live with the results, and I think Delly did that.” 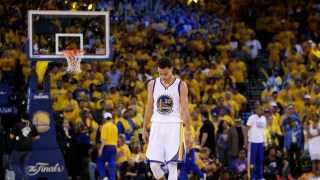 It was a brilliant team defensive performance holding down one of the most powerful NBA offenses — the Warriors scored just 95 points and they had an extra five minutes of game time.

The question is, can the Cavaliers sustain this defense?

Why not, they already hey have been. Through the regular season and playoffs, when Kevin Love and Kyrie Irving were off the floor but LeBron was still on it, the Cavaliers allowed just 93 points per 100 possessions (that much better than the Warriors’ league-leading regular season numbers.

The Cavaliers have developed a new, gritty, grinding personality on defense. They have done this to the Bulls and Hawks; there is no reason it will not continue.

On the other hand, Golden State is going to make more shots at some point. Curry is not going to go 2-of-15 from three for a lot more games. Klay Thompson, the one Warriors knocking down shots, summed it up well.

“They’re a long, athletic team,” Thompson said. “They are playing good defense, but I think a lot of it is on us. We’re not playing like ourselves. We’re not moving the ball like we should. We only had 16 assists. That’s not us, man. We usually get 20, 25 when we’re playing great. So we’ve got to move the ball better and trust each other. But they are playing well on the defensive end. But it’s more on us. We’ve got to play with a better rhythm.”

The Cavaliers disrupted that rhythm, and the result was the Warriors seemed to rush shots — they shot earlier in the clock with less ball movement. Then when they did get looks they just missed them — the Warriors as a team shot 31.6 percent on uncontested looks.

The Cavaliers are going to continue to defend well through the rest of this series. Memphis gave the Warriors trouble — Curry was 15-of-40 through games two and three of that series — but eventually the Warriors adjusted.

If they find the right adjustments in this series, the Warriors may go on another run. But the Cavaliers defense is not going to make it easy on them.