OAKLAND — What happened in Game 1 of the NBA Finals may have seemed like a playoff anomaly to people not used to watching Golden State — their starters bogged down to start the game, so Warriors coach Steve Kerr went deep into his bench early and trusted them to turn things around.

It wasn’t. It’s how the Warriors have played all season.

“We know we didn’t play that well, it wasn’t us,” Warriors’ Brazilian reserve guard Leandro Barbosa said of the start to the game. “We were excited and nervous because we hadn’t been in that position before, it was everything new for us, so many people, it was a different feeling. Once we got our momentum, everything was very good.”

“It’s oftentimes our second group that gets the ball moving and gets our team going, not just (in Game 1), but we’ve had several games where that’s been the case,” Golden State coach Steve Kerr said. “Sometimes our starters get a little bogged down, and we go to Shaun (Livingston) and L.B (Barbosa). and Andre (Iguodala). Last night Mo (Marreese Speights) with his return, and the game can change. Sometimes you just need a different look. And I do believe that there is a certain chemistry that comes with relying on a lot of people too.”

It’s easy to point to Andre Iguodala coming off the bench and guarding LeBron James and saying that is how the Warriors’ bench contributed, but it was much more than that.

In Game 1, Golden State had a lineup with at least three bench players on the court for 14 minutes and were a +4 in that time, with some key lineups doing very well. It was the Warriors bench that sparked a comeback from 14 down in the first half. 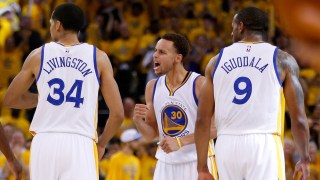 Contrast that with the Cavaliers, where David Blatt played six guys at least 33 minutes, giving limited duty to anyone else, such as James Jones (17 minutes) and Matthew Dellavedova (nine minutes).

What Blatt did in Game 1 is what most every coach does in the playoffs, tightening his rotations — and it almost worked. Behind the brilliance of LeBron, the Cavaliers were an Iman Shupert putback at the buzzer away from stealing Game 1 on the road.

But that’s not what the Warriors do. Those “Strength in Numbers” T-shirts everyone wears is not just a marketing slogan, it’s a philosophy.

“I think every team is different,” Kerr said. “I thought about it as soon as I got the job looking at the roster, and, in fact, the first meeting of the season the night before training camp, we had a team dinner, and that was a big theme was strength in numbers. We’re going to try to use our depth throughout the regular season and in the playoffs, and that’s been a big part of our team.”

“I don’t think it should change,” Barbosa said of the rotations. “(Kerr) did that the whole season and the whole playoffs. I think there’s a reason for him to do that, we kind of know what we have to do when we’re out there, he’s got a lot of confidence in us.”

As he should — that bench is a key reason Golden State is up 1-0 in the NBA Finals. And that bench will get its shot in Game 2.