OAKLAND — However anybody wants to spin it, Kyrie Irving’s season-ending knee injury sucked the wind out of what had been shaping up to be a phenomenal NBA Finals. The Cavaliers have dealt with injuries throughout the postseason, and they’ve had very little room for error because of it.

But the Warriors are better, and healthier, than any of the three teams they played in the Eastern Conference playoffs. Cleveland was already a longshot in this series. Now, it feels lie a question of whether it will be over in four games or five.

Not that the Cavs are ready to throw in the towel.

“Look, we’ve found a way,” head coach David Blatt said Saturday before practice. “We won a Chicago series without Kevin [Love] and with Kyrie pretty limited and missing a couple of games or missing parts of games. Obviously, in the Atlanta series the same thing with Kev out and Kyrie out for parts of that series. That’s a credit to the work that all the team has done. Certainly LeBron has recognized the need to take even more responsibility and has done it in a great way.”

The Warriors’ coaching staff has anticipated this mentality and hammering into the players how successful the Cavs have been with James on the floor without their other two stars. The key to their success has been smallball lineups with James at power forward and Tristan Thompson at center. But those lineups are highly effective when they’re an option, another look the Cavs can throw at teams. When it’s their only option against a team as versatile as the Warriors, it might be a different story.

“From an analytics standpoint, it’s not a big sample size,” said Cavs GM David Griffin of the lineup data for James-led lineups without Irving or Love. “I think you have to take a little bit of that with a grain of salt because it’s also about match ups and we were really fortunate the teams we played lent themselves to the style we were going to play. Golden State is a totally different animal. If you get to choose, you’ll always choose more talent. But I’m really grateful we’ve got the mentality we have.” 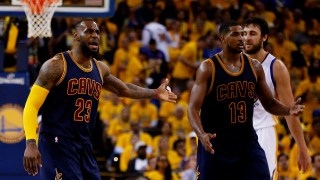 That mentality already has the team making adjustments. Matthew Dellavedova will start for Irving, because they don’t have many other options. But as good as he’s been in these playoffs, he played an ineffective nine minutes in Game 1 and expecting him to guard Stephen Curry for long stretches is going to be a lot to ask. Still, the Cavs are confident they can make it work.

I guess with Delly in or whoever we may add into the starting lineup, there’s going to be a little more ball movement just because of the guys we have on the court. When we’re moving the ball and we’re sharing it and screening for each other, pinning away, we’re pretty tough to guard. So we’ve made our adjustments. But also, at the same time, if LeBron’s on the block, that’s almost your best bet right there.

The challenge for the Warriors, now, is going to be to keep the same focus now that their opponent’s second-best player is out of the picture. Losing Irving, especially the much-improved version that showed up in Game 1, changes things drastically for Cleveland.

“A lot of people are saying the series is over, but that’s not true,” said Warriors guard Klay Thompson. “This is a team that’s more than capable. They did beat the Atlanta Hawks twice without him, and that was the best team in the East. So you’ve got to respect what the other guys can do. Obviously, Kyrie’s a huge part of their team. He’s one of their best players. But you can’t let your guard down. They’ve still got guys who are more than capable of making plays.”