Tristan Thompson had been a fine member of the reserve unit for the Cavaliers all season long, providing a steady amount of defense and rebounding anytime his number was called.

But since being inserted into the starting lineup during the playoffs, he’s turbocharged a Cleveland team that absolutely tore through the Eastern Conference on their way to the NBA Finals.

Once Kevin Love was ruled out for the season after the injury he suffered in Game 4 of the first round matchup with the Celtics, Thompson was immediately given a starter’s share of the minutes. He brings a very different dynamic to the team than Love does, and it’s why Cleveland has looked so dominant since Thompson was pressed into providing a heavier level of service. 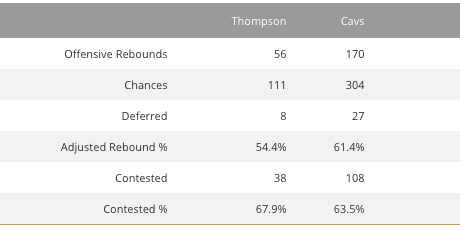 The reason Thompson has been so impactful is because of just how much focus he puts into rebounding on seemingly every possession, and the numbers above show just how involved he’s been with such a high number of his team’s overall rebounding chances. As for his abilities on the offensive glass specifically, take a look at this play from Cleveland’s Game 3 win over the Hawks:

Notice how Thompson’s natural inclination, before the offense is even initiated, is to lurk along the baseline. Love is more relied upon for his offense, and is rarely if ever just hanging around under the basket, looking to secure rebounding position as things begin to develop.

The same is true as Thompson comes up to set a screen for Kyrie Irving. When Love does this, he pops out the majority of the time, in order to be in position for a jumper or three-point shot in the event the ball-handler decides to pass. Thompson will almost always roll toward the basket — sometimes, that can result in his being able to convert an alley-oop pass, but what’s more important is his getting closer to the rim to give himself the best chance of rebounding in the event of a missed shot.

Once the shot goes up, watch the way Thompson relentlessly battles Mike Muscala for the rebound, even though he doesn’t have the inside position. This is what Thompson does so well, and has been doing so consistently in these playoffs: Offensive rebounding is what Thompson is looking to do on every one of his team’s possessions.

When you go back through Love’s offensive rebounds, the fight is something that’s rarely seen, and most of them come to him on friendly bounces, or when he’s in a favorable position to be able to follow his own shot. It’s just not something that’s regularly on his mind.

This is not meant to slander Love’s ability, or his relative level of importance to the Cavaliers when he was healthy. Thompson simply provides a different skill set than Love does, but it’s arguably one that’s better-suited to his team’s overall needs.

Thompson has averaged 11.44 rebounds per game in nine appearances since replacing Love as a starter, and the Cavaliers are 8-1 in those contests. LeBron James, of course, has plenty to do with the team’s success during that span. But the way Thompson has elevated his game has made a huge difference, and the style Cleveland is playing at this very moment has the team primed for success in its matchup against the Warriors in the NBA Finals.