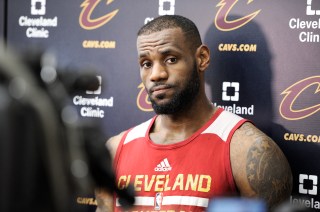 As much as anyone has the ability to slow down LeBron James, the Warriors have the ability to slow down LeBron James. They have the personnel and the scheme to counter whatever lineups Cleveland throws at them. The question, and maybe the key to the series, is whether the Warriors’ variety of weapons is enough to overcome the sheer will and power of James, whose presence alone can neutralize teams that, on paper, seem to have enough to stop him.

Golden State doesn’t have that singularly brilliant perimeter stopper that has allowed other teams to successfully limit James, the way Jimmy Butler was in the second round or Kawhi Leonard was in last year’s Finals. There’s no marquee matchup on the defensive end for James, no single nemesis. But the Warriors have such a well-rounded defensive attack that there are at least four different players in their rotation who can more than hold their own.

Harrison Barnes will likely get the first crack at defending James, with Draymond Green and Andre Iguodala getting some time on him as well. If Golden State can get away with keeping Barnes on James for stretches, that gives Green the opportunity to battle with Tristan Thompson and Timofey Mozgov in the paint. Having that versatility is going to be crucial for the Warriors, given Thompson’s dominance on the glass. Green is the player most suited to defending James, but the Warriors have other players they can at least throw at him, so Steve Kerr will probably avoid using him as long as he can, to use him elsewhere.

The problem with defending James is that there are no shots you want to give him. He hasn’t been shooting well at all in the playoffs so far, so theoretically, the Warriors will want to give him plenty of open jumpers if it means not letting him get to the rim. The problem with this is that giving LeBron James open shots of any kind is just asking him to make you pay, no matter how he’s shooting at the moment, because of who he is.

The Warriors’ best-case scenario is that James’ jumper continues to be off. Even then, it hasn’t stopped him from dominating throughout the playoffs. He’s still been able to overpower defenders both with his own offense and with his still-elite playmaking skills. If the jumper starts falling again, that just makes him even harder to defend.

When the Cavs go small, with James at power forward and Tristan Thompson at center, Green will see the bulk of the time on him. Green’s success guarding James could be the deciding factor in the series — he has the smarts and the instincts, but James can overpower him. If Green sees extended time on James, especially if he plays him one-on-one, James will look to get him in foul trouble, and taking Green out of the game for an extended stretch would be bad news for the Warriors.

Another advantage the Warriors have is the ability to tire James out on the defensive end. Beyond him and Iman Shumpert, Cleveland’s defensive personnel is shaky, especially on the perimeter. James will see some time on Stephen Curry, since he always guards the other team’s best player. If Curry can make James chase him around the three-point line, it will go a long way. Klay Thompson can do the same thing if James gets switched onto him. There are no weak links in the Warriors’ offense, so no matter who James is guarding, they’re going to make him work. If they can get him in foul trouble, so much the better.

For the last five-plus years, James has been an unsolvable riddle for most of his opponents. The Spurs managed to neutralize him last season with Leonard’s otherworldly coverage and a smart team defensive scheme. Golden State has a similarly sound system and plenty of personnel to stop him. The question as always with James is, will it matter?