The NBA has released its list of participants for this year’s Draft Combine, which will be held in Chicago from May 12-17.

While there are plenty of interesting lottery-pick level prospects expected to attend, the guys near the tops of most teams’ draft boards are noticeably absent from the list.

Karl-Anthony Towns and Jahlil Okafor are the names frequently discussed as the top two overall picks, and neither will attend. Same goes for international prospects like Emanuel Mudiay, Mario Hezonja and Kristaps Porzingis, all of whom project as lottery picks in more than one of the respected mock drafts that exist.

The combine consists of drills, measurements and interviews, and while this year will also feature a five-on-five scrimmage format which could make for some competitive games, most of the top prospects (i.e., anyone there who is expected to be a first-round selection) will be sitting that portion out. 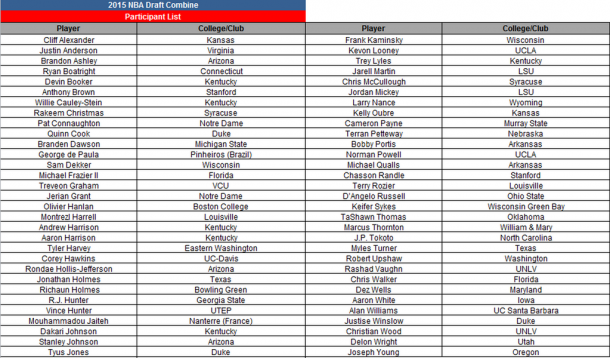