Predicting this year’s NBA playoffs — particularly in the Western Conference — feels a little like predicting the NCAA Tournament:

You know some upsets are coming, the hard part is figuring out where.

The ProBasketballTalk staff — Kurt Helin, Brett Pollakoff, Dan Feldman, and Sean Highkin — lay out our picks for the upcoming playoffs. And we stay pretty close to the chalk picks a lot of the time, just a few upsets. Unless you consider the Spurs over the Clippers a big upset. And you shouldn’t.

Here are our first round predictions, in a handy table. 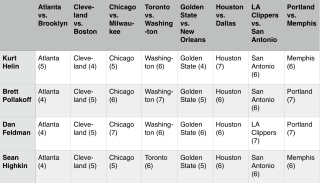 The only series with a real split is Portland and Memphis, which is maybe the hardest to predict. Mostly because of the mass number of injuries to those teams.

We’re going to skip ahead a little, over the second round, straight to the conference finals. If you care deeply about what we think happens in the second round you can piece it together easily. And I’m a little worried about you.

As you might expect, when it gets to the NBA Finals, we all think the Western Conference takes it. The only difference is which Western team.