If you watch closely every night in the NBA you can learn a little something. We know you are busy and can’t keep up with every game, so we’re here to help with those lessons from another night in the Association. Here’s what you missed while watching the True Detective season 2 trailer over and over…

1) Russell Westbrook tries to will Thunder into playoffs with 54 points, but it’s not enough. Oklahoma City may miss the playoffs, but it’s not for a lack of effort from Russell Westbrook. Sunday he dropped 54 points — on 43 shots, which is efficient compared to his recent big games — trying to will the Thunder past the Pacers. He couldn’t. Indiana won 116-104 behind 30 points from C.J. Miles. More than that, Westbrook may have cost his team a shot at the postseason when he got a techical in the fourth quarter. It was a quick whistle from Ed Malloy and should be rescinded by the league, but if it’s not Westbrook has 16 techs and would be out Monday night against Portland. The Thunder and Pelicans remain tied for the final playoff spot, but the Pelicans have the tie breaker. A New Orleans win Monday, and an OKC loss, and the Thunder can start making tee times for next weekend.

With the win, the Pacers moved into a tie with Brooklyn for the last playoff spot in the East.

As for the Rockets… the West is still a mess. Houston, Memphis and the LA Clippers are all 54-26, just half a game back of San Antonio at 55-26. While the Trail Blazers will finish with the four seed (they won the Northwest Division) the other four teams could finish anywhere from 2-6 still. With a couple games left. The West is a mess.

3) Cleveland helps Celtics take big step toward playoffs. If you can name the Cavaliers’ player, they probably rested on Sunday. Which is the smart move for Cleveland, it has wrapped up the two seed and wants guys fresh for the playoffs (even if the first round will be a virtual bye). No LeBron James, Kyrie Iriving, Kevin Love or much of anyone else. That was a huge break for the Celtics, who picked up an easy win 117-78 and with that moved into the seven seed, one game clear of Brooklyn and Indiana (tied for that eight slot). If the playoffs started today, Boston would face Cleveland. And get crushed.

4) Milwaukee’s you East six seed, hurt Brooklyn in the process. Brooklyn is the eight seed, tied with Indiana for the final playoff spot in the East, because the Nets lost to the Bucks. What that means for Milwaukee is they are locked in as the six seed in the East — which before the season seemed impossible. This Bucks team is taking a step forward (although I don’t love the trade for Michael Carter-Williams).

5) Kenneth Faried put on a show, dropped 30 on the Kings. The Manimal showed up to play on Sunday and had 19 points in the first quarter. He went on to score 30 in a 122-111 Denver win over George Karl’s Sacramento squad. Faried didn’t try to stretch his game; he just got to the rim. Check out this shot chart and video. 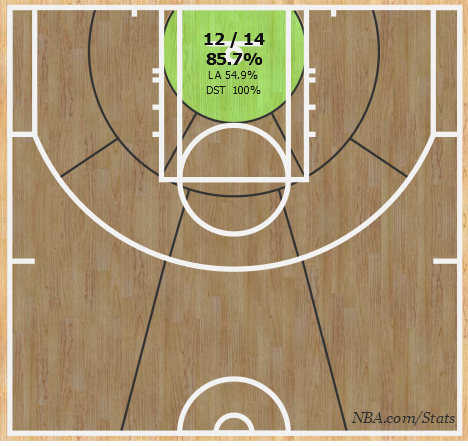