JJ on the hair: "We're going into playoffs so that's a good look for it, I guess." http://t.co/V1UjL49bAW #WeTheNorth pic.twitter.com/JeI1woLNms

Like Byron Scott with Nick Young, Johnson’s coach – Dwane Casey – didn’t like the style. Neither did teammate DeMar DeRozan.

What does DeRozan think of James Johnson's new hairdo? "It's terrible, in my opinion". Would you dye your hair red too? "Never in my life"

Casey: "It's an individual choice. You'd prefer a guy not dye his hair red but thats James, thats his decision. Nothing I can do about that"

Casey's not a fan of JJ's new hairdo but does hope he channels inner Rodman. "If he gets 15 rebounds he could dye it purple for all I care"

If Johnson is following Rodman’s lead, I hope this is next: 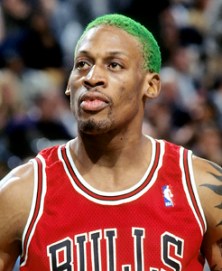