The Bucks unveiled three renderings of a proposed new arena and entertainment district that the team hopes to develop in downtown Milwaukee.

These conceptual images are an important step in the process as Bucks ownership continues to present their preferred site and vision to public officials, whose partnership is necessary for the proposed development.

The images depict early conceptual drawings of a new multi-purpose venue and entertainment district that anchor an ambitious new development vision activated by sports, entertainment, residential and office uses. The proposed site, which primarily sits between Fourth Street and Sixth Street from State Street to McKinley Avenue, will seamlessly link with active development on all sides, including Old World Third Street, Schlitz Park, The Brewery, the Milwaukee riverfront, Water Street and the Wisconsin Center.

The vision is for an arena designed for maximum flexibility and year-round use. A dynamic entertainment district will serve as a destination that draws the people of the region together for unforgettable experiences and a place people will love to gather for generations to come.

“We’re not just trying to build a new home for the Milwaukee Bucks, but create a 365-day attraction for Wisconsin residents that will help revitalize downtown Milwaukee,” said Bucks president Peter Feigin. “We’re excited to share this glimpse of our vision for the future as we continue to work with our local and state partners to arrive at a viable plan. This collective effort will create a ripple effect of growth, development and transformation for the entire community and region.”

The part about year-round use is important to emphasize, because the club is seeking public funding for the project which has not yet been secured. In the meantime, enjoy the photos — one of which appears to show two kids wearing Hawks jerseys in its bottom left corner, for some reason. 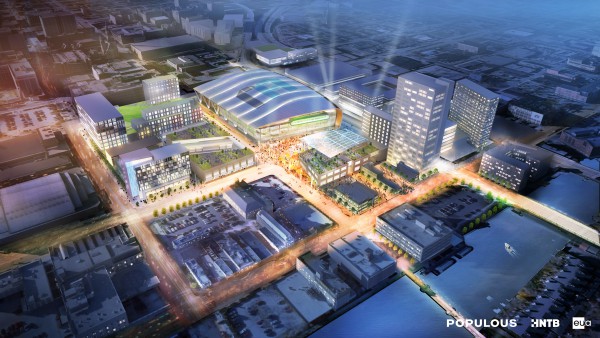 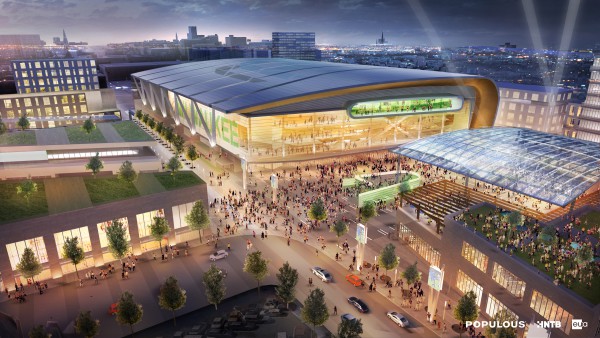