Michael Jordan initially retired from basketball after playing nine seasons and winning three NBA titles, but thankfully for fans of the game, his first stint away didn’t last too long.

Jordan skipped all of the 1994 season and most of the next one to pursue a minor league baseball career, before ultimately getting the itch to resume his professional basketball one, this time with the Bulls for four more seasons.

It’s 20 years to the day that Jordan announced his return, and he did so with nothing more than a simple two-word statement. 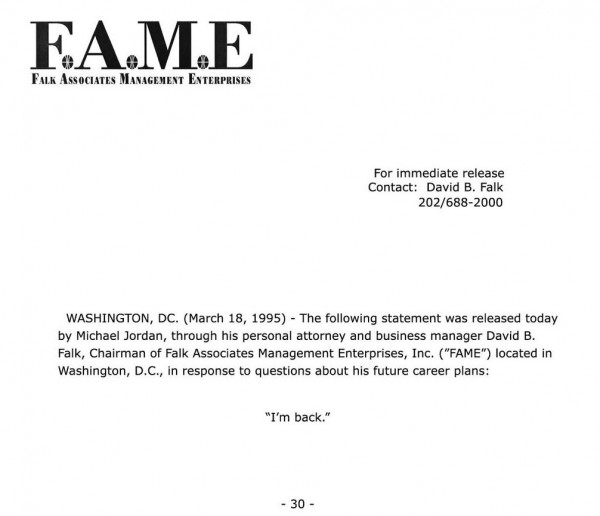 Jared Zwerling of Bleacher Report has a look at how this came to pass:

After about two weeks of practicing at the Bulls’ Berto Center—the team’s training facility—Jordan wanted to get Falk and Polk’s input on a major decision he was leaning toward: returning to the NBA after retiring in 1993 and playing minor league baseball for a little more than a year. …

That same day, Jordan shared the news with Jackson and Bulls owner Jerry Reinsdorf. Falk, who’s now the CEO of F.A.M.E., privately called former NBA commissioner David Stern and Dick Ebersol, who was the chairman of NBC Sports. Then Falk took about four attempts to write a press release officially announcing Jordan’s return, trying to put into words how his client had a change of heart and missed the game.

But Jordan wasn’t comfortable with the different drafts, and at that moment, he took matters into his own hands. He thought of a way to keep to his style of being simple and straight to the point:

“He felt that it didn’t require an explanation or a justification,” said Falk, who faxed the final press release to media outlets. “I thought I was a pretty good writer, written a lot of things, but he said, ‘Let me do this.’ So he sat down at the table and thought about it for a couple of minutes and he wrote, ‘I’m Back.’ He said, ‘OK, that’s it.’ It was classic Michael Jordan. It was elegant in simplicity, it communicated how he felt, it said it all.”

Jordan’s first game back was in Indiana against the Pacers the very next day, and it was a rough one — he finished with 19 points on 7-of-28 shooting, in a game his team lost by seven points.

It didn’t take Jordan long to regain his groove, though. He dropped 55 points in a win over the Knicks at Madison Square Garden just four games later.

Somewhat fittingly, the Bulls face the Pacers tonight — and you can stream it live if you happen to be a CSN Chicago subscriber.