Michael Beasley has been a mixed bag for Miami the last 10 games. What else did you expect from the former No. 2 pick?

He’s played good defense — surprisingly — and been able to score pretty efficiently when he gets around the rim. However, his shot selection remains dubious. At best. He’s averaged 9.5 points a game but needed 9.9 shots a game to get there.

He’s gone through two 10-day contracts in Miami, and they are going to keep him, reports Ira Winderman of the Sun-Sentinel.

Spoelstra indicated Beasley will be signed for balance of season. Wednesday.

Beal has been averaging 22 minutes a game since joining the team, which speaks to Miami’s need for depth (especially with Chris Bosh out.

But this shot chart shows a guy the Heat may not want to lean heavily on in the postseason. 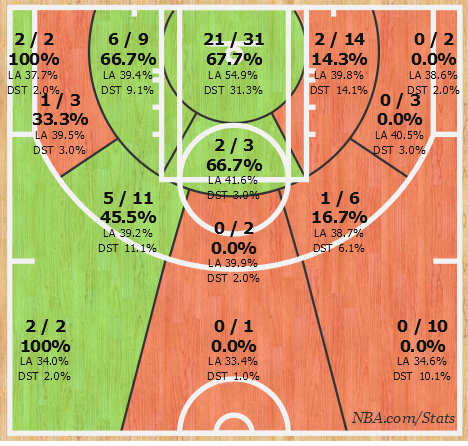