If you watch closely every night in the NBA you can learn a little something. We know you are busy and can’t keep up with every game, so we’re here to help with those lessons from another night in the Association. Here’s what you missed while trying to find the best way to break in your new baseball glove…

1) San Antonio would like to remind you they are the champs (and are playing like it again). We talked about this on PBT Extra Monday — the Spurs are starting to play like the Spurs again. Which should concern other teams out West with title aspirations because the Spurs are the bar to clear. With their comfortable win Tuesday over Toronto, San Antonio has won six in a row. During that streak, they are scoring 112.6 points per 100 possessions (second best in the NBA at that time) while allowing just 95.5 points per 100 (sixth best). It all starts with Tony Parker getting into the paint again — half his shot attempts Tuesday came within eight feet of the rim — and he finished with 23 points and nine assists. Plus, Parker was 6-of-9 on contested shots. However, the real star was Kawhi Leonard with 24 points, 11 rebounds, and five steals. If you’re looking for a highlight, he threw down on Tyler Hansbrough.

2) Meanwhile, the Raptors slide continues unabated. Part of the reason San Antonio looked so good Tuesday was that Toronto looked so awful. Again. The Raptors have now lost 9-of-10, and that one win was against the Sixers. The problem is their defense, which is allowing 109.1 points per 100 possessions in that stretch, 29th in the NBA. Tuesday they scored a respectable 107 points against the Spurs, Kyle Lowry scored 32, but they lost by 10. It’s strange because Dwane Casey has the reputation as a defense-first coach, but this team’s system leaves them in constant mismatches and finds them scrambling as much as any team in the league. The Raptors looked better in the second half; they made their run, but by then it was too late.

3) You can’t throw an alley-oop pass too high for Anthony Davis. Look how high Davis has to go to pull in this pass from Norris Cole. Seriously, so long as it’s in the building he can get it.

4) LeBron became the Cavaliers’ franchise leader in assists. LeBron James moved past Mark Price to become the Cavaliers all-time assist leader when he hit James Jones in the corner, and Jones knocked down a three. That gave LeBron 4,207 assists as a Cav. By the way, he already owns the franchise records for points and steals.

5) Rodney Stuckey? Rodney Stuckey keeps the Pacers train rolling right toward the playoffs. Every once in a while Rodney Stuckey can still get it going, and Tuesday night was one of those times — he came off the bench and shot 6-of-7 for 16 points. And that was just the first quarter. Stuckey had 25 points by the half and finished with 34 points on 13-of-19 shooting. He had one beautiful shot chart on the night. 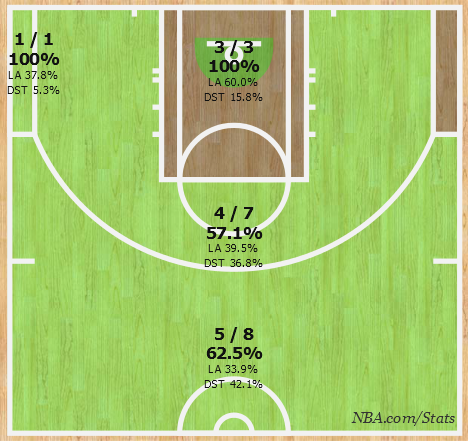 The Pacers tied their franchise record wit 17 three-pointers on their way to an easy 118-86 win over Orlando. Indiana has now won six in a row and looks like they should take one of those final two playoff spots in the East. Plus the team will get Paul George back soon, although not by March 14 as he had once hoped. But soon.