If you watch closely every night in the NBA you can learn a little something. We know you are busy and can’t keep up with every game, so we’re here to help with those lessons from another night in the Association. Here’s what you missed while dying from an uppercut from Batman…

1) James Harden is a force of nature. The Houston Rockets are now 8-4 with Dwight Howard sidelined getting his knee healthy; winning two-thirds of their games has been enough to hold on to the third seed in the West. The Rockets can thank James Harden for that; he has been a force of nature in this stretch. Monday night he started out slowly (he shot 0-of-7 to start the game) against the Timberwolves but by the time it was over Harden had put up 31 points on 20 shots, pulled down 11 boards and dished out 10 assists to record a triple double. He was why the Rockets held off the Timberwolves comeback and won. And he just abused Ricky Rubio on this play at the end of the third quarter.

2) Derrick Rose’s shooting woes are raising some eyebrows. Derrick Rose made his first shot Monday night, a three from the wing. He missed his next 12 shots. He is now 8-of-34 (23.5 percent) in his last three games. Rose had said after his rough shooting night last Friday he doesn’t worry about the missed shots, it’s the quality of shots he gets. I would suggest that when your shot chart looks  this you should start to be a little worried. 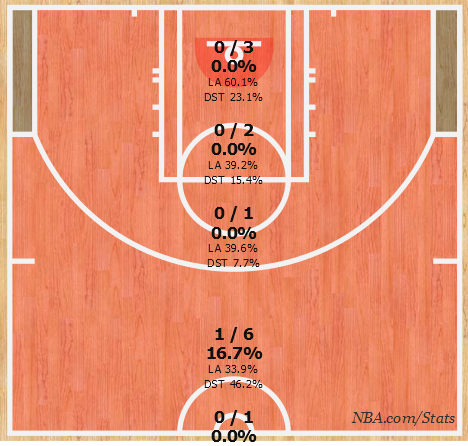 To be fair, Rose has had some impressive stretches of play this season, but he is in a slump right now. One that has people wondering what is going on.

3) Isaiah Thomas stuck the dagger in his old team in Phoenix. You know he loved this. Isaiah Thomas has felt underappreciated at his first two NBA stops. In Sacramento they kept bringing in point guards to take his place, so he eventually bolted for Phoenix last Summer. But there the three-guard rotation (with Goran Dragic and Eric Bledsoe) didn’t work so the Suns sent him off to cold and rebuilding Boston. So when the Celtics faced the Suns Thomas was looking for revenge — he scored 21 points and  dished out seven assists. More importantly, he had nine points in the final six minutes of the game to seal the Celtic win, which included this four-point play (and the dagger a couple possessions later).

4) On his 20th birthday Andrew Wiggins showed how he is developing into a star. Minnesota fell to Houston Monday, and while The Beard stole the show Andrew Wiggins put on one of his own. He was attacking (he shot 7-of-11 at the rim), was knocking down the midrange jumper (4-of-7) and finished with 30 points. His jump shot has developed quickly this season. He’s already a pretty good defender (although he was asked to corral James Harden most of Tuesday night, and that has been a struggle for everyone this season). His athleticism is off the chart. He’s going to win Rookie of the Year going away — in part because he’s the only guy still standing, but also he’s looking like a real star in the making. The kind of guy Cleveland may regret trading in a couple years (we’ll see how the Kevin Love thing plays out).

5) We said it yesterday, we’ll say it again: Don’t sleep on the Grizzlies. Memphis just beat Portland and the LA Clippers on both ends of a back-to-back. Two nights in a row they ground down two of the top teams in the West, completely controlled the tempo and got the win because it was their kind of game. You knew the Clippers game was going to be played in the Grizzlies’ style when the teams were 0-of-11 shooting combined to start the game. Memphis remains the two seed in the West and while we talk about Golden State and an up-and-coming Oklahoma City team as contenders in the West, do not sleep on Memphis. They can knock off anyone.