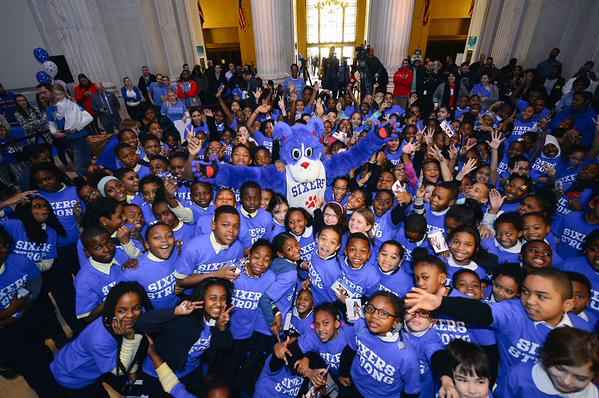 And he can dance.

I love inflatable mascots — watching those waddle around and dance is funny. I’m probably not the target demographic for the real ones, particularly anthropomorphic dogs. But the Sixers put a lot of time coming up with him and a full on backstory. From their press release:

As (the Sixers’ mascot designers) dug through piles of books, watched movies and spoke with Philadelphians far and wide, along with more than 1,000 kids, they found a common thread…a special creature…whose ancestors had been a part of the city’s history from the start.

When George Washington crossed the Delaware, a blue tail was wagging in the boat.

When our nation’s forefathers signed the Declaration of Independence, a blue paw was found on the scroll.

A blue mouth dragged Ben Franklin to safety after he was struck by lightning and discovered electricity.

A furry blue flash ran alongside Rocky Balboa, and put two paws in the air when he reached the top of the Art Museum steps.

So, he’s the Forest Gump of mascots.

If you like him, follow him on Twitter. You can also see him at Sixers games, where there will be nights Franklin will be more entertaining than the product on the court (although the Sixers have won four in a row at home).