All-Star week is upon us, and as part of the festivities, we’ll have a series of posts that are intended to give you an inside look at what’s going down on the streets of NYC. This time: the NBA’s mapping of the history of New York City basketball.

When the NBA’s All-Star weekend descends upon a city, it’s not only a chance for the league to celebrate its biggest stars during its annual midseason exhibition, but it’s also an opportunity to put a spotlight on that city itself.

New York has a rich basketball tradition, and the league has done an incredible job of highlighting that by putting together an interactive map showing the History of New York City Basketball.

“Filled with information on more than 500 New York City legends, this interactive basketball experience, which includes highlights of more than 150 icons and more than 140 unique photos, pays tribute to the players, coaches and teams who not only wrote the history of the game in the city, but also contributed to its growth worldwide.  Spotlighting more than 100 city landmarks and schools located throughout the five boroughs, the map recognizes the Big Apple’s contribution to the high school, collegiate and professional game.

“A History of New York City Basketball celebrates the rich tradition of the New York Knicks, the Brooklyn Nets and pro legends such as Walt Frazier and Earl Monroe who thrived in the city.  The map also tells the stories of native New Yorkers who went on to basketball stardom around the globe, such as Bob Cousy, Kareem Abdul-Jabbar, Connie Hawkins, Chris Mullin and Kenny Smith.  From the Harlem Rens to the Harlem Globetrotters and from Red Auerbach to Red Holzman, the map is an expansive history of this cradle of basketball excellence that has stretched more than a century.

“While Manhattan’s Madison Square Garden and Brooklyn’s Barclays Center are focal points, the map also locates destinations like the 69th Regiment Armory, the onetime home of the New York Knicks; the site of the former Power Memorial Academy at 61st Street and Columbus Avenue, alma mater of NBA Legends such as Len Elmore and Abdul-Jabbar; and Rucker Park, a playground basketball mecca that has hosted NBA legends such as Wilt Chamberlain, Julius Erving, Nate “Tiny” Archibald, and Kevin Durant.”

The map is incredibly detailed; check it out below, but click through and zoom in to see the history in the borough of your choice. If you’ll be in the city for All-Star weekend, this is a great resource to see some of the game’s historic sites. 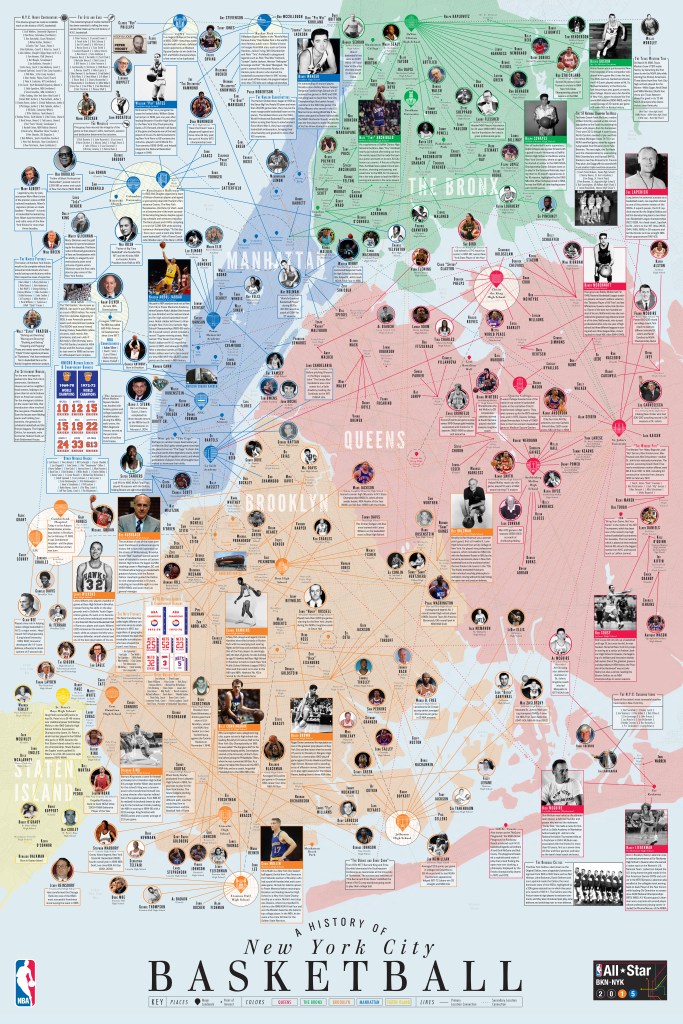