In the past, the Skills Challenge event that takes place on All-Star Saturday night had players going through the course one at a time, with those who completed it the fastest advancing to the later rounds.

This year, the format has changed slightly — not only will we have two players running the course at the same time, but there’s a bracket system in place, as well as a three-point shot at the end of the course that should make things extremely interesting.

And here’s the bracket of the how the matchups will shake out: 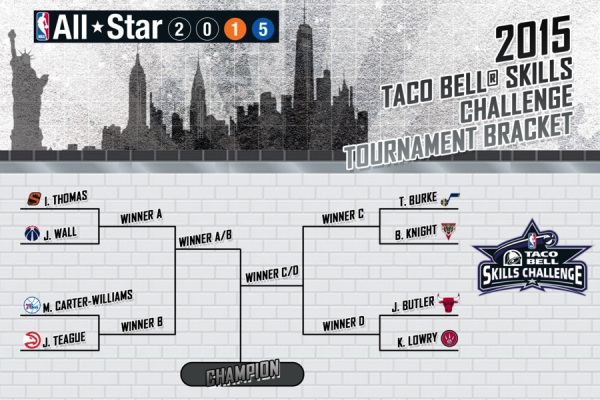 Last season featured a team format, where Trey Burke and Damian Lillard took home the title for the West.

Welcome to NBA media day, when optimism overflows and everyone swears there are no chemistry problems, no fit questions, it’s all puppies and rainbows with their team.

The night before Lakers media day, Russell Westbrook got a head start on saying the right thing in an interview with ESPN’s Adrian Wojnarowski. Trade? Not worried about it. Fit? Not going to be a problem. Everyone is good now if you ask Westbrook, and he was in trade talks all summer is irrelevant.

“I need to just do my job. Whether I’m wanted [by the Lakers] or not doesn’t really matter. I think the most important thing is that I show up for work and I do the job like I’ve always done it: Be professional and go out and play my ass off and compete…

Maybe [he is] as a starter or maybe it’s off the bench. “I’m all-in on whatever it takes for this team to win,” Westbrook said. “I’m prepared for whatever comes my way.”

Words are nice, but actions are what will matter. Westbrook reportedly said all the right things to LeBron James and Anthony Davis a year ago before getting traded to the team, but his not wanting to play a role and fit in was a big issue. Westbrook swears it won’t be this time, whatever Ham wants Westbrook will execute.

“There’s so much optimism on how we can be great, how AD, LeBron, myself — can be unstoppable in my opinion,” Westbrook said.

That’s optimism. Even if Westbrook fits in, Davis stays healthy all season, and LeBron continues to defy father time, these Lakers are not title contenders. A playoff team for sure, but not contenders.

These Lakers will face adversity — maybe early, Los Angeles has a rough first couple of weeks — and how the Lakers, under new coach Darvin Ham, respond to those challenges will define their season. Last season’s response from the Lakers was… not good. They rolled over. Ham has promised not to let that happen, but there will be things out of his control.

Last season Westbrook was one of those things for Frank Vogel, we’ll see how he responds this season.