“Don’t it always seem to go that you don’t know what you’ve got ‘til it’s gone.”
—Joni Mitchel

LOS ANGELES — Take it from someone who lives in the Los Angeles area — vocal parts of the Laker fan base was unfair and unkind to Pau Gasol when he was with the Lakers. Especially when he got injured during the Mike Brown coaching mess, then when he was misused by Mike D’Antoni. But frankly, even back when the Lakers went to three straight Finals (winning two) in the Kobe Bryant/Gasol era, you heard a lot of people around the city calling him “Gasoft.”

But as Joni Mitchel reminded us, it is the absence of something that can remind us how special it is. (That or you can compare the Gasol era to the Dwight Howard Laker era, and suddenly the perspective shifts.)

Thursday night he returns to Staples Center — a place where someday his No. 16 jersey could be retired someday — as a member of the Chicago Bulls, and he will get a loud, warm welcome from the fans who now remember fondly the titles and high level of play that seem a long way from returning to the building. There will be a video tribute to Gasol during the game.

And there are the “Thanks Pau” shirts.

You see the front above, this is the back. 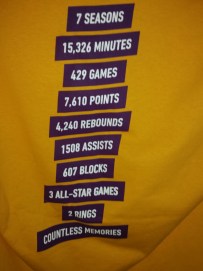 Then Lakers fans will get a reminder up close and personally of how good Pau can be when used properly.