Every night the NBA can be a cold hard reality — there are winners, there are losers. It’s the nature of the game. We know you are busy and can’t keep up with every game, so we’re here to bring you the best and worst of the NBA each week night. Here’s what you missed while realizing you can’t really take a pig on a plane…

John Wall, the Washington Wizards. There was a lot to like about Washington’s impressive Monday night win over Miami: Rasual Butler is providing a really spark off the bench, the Wizards played their best defensive game of the season (particularly without Nene who is still out with his foot issue), and Marcin Gortat is rolling strong to the rim hard. But John Wall is the guy who brings all that together and makes it work — he absolutely owned the Miami guards on the night, scoring 18 points and dishing out 13 assists. Wall and Gortat are showing real chemistry on the pick-and-roll. When Wall is playing an all-around game like this, the Wizards are tough to beat.

Miami’s free throw/three point shooting. For everything Washington did right Monday night to get the win, the Heat just shot themselves in the foot. They left a lot of points on the court. First off, they went 18-of-30 from the free throw line, just 60 percent (the Heat are shooting 75 percent from the stripe on the season). The other problem was their three point shooting. We’ll let a shot chart explain the problem. 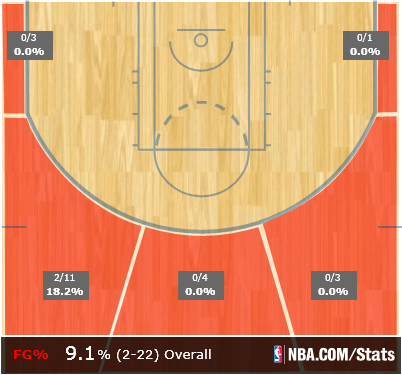 Denver Nuggets. They have won seven of eight now and after a dreadful start to the season they have found their groove. Well, they had that groove for about two and a half quarters Monday, then they took the foot off the gas and the feisty Jazz made a game out of it late. But still it’s a win an there were more good signs in Denver — Ty Lawson is orchestrating the offense beautifully, Timofey Mozgov was playing good defnese, and Kenneth Faried was doing Kenneth Faried things (like the play below). The question is will they carry that over to Tuesday night’s bigger game against Portland (and how will they do without Arron Afflalo who likely gets suspended for his foul on Trey Burks).

Los Angeles Clippers. They have won seven of eight as well and while the questions about this team as a contender still linger — consistency of defense, play out of the three spot — the Clippers are doing a pretty good job answering them of late. J.J. Redick continued the run of great backcourt play for Los Angles, Blake Griffin put up 23, the Clippers starting lineup was +25 on the night when on the court together, and the Clips continued their run or ridiculously good offense (124.7 points per 100 possessions in this game, which is 10 higher than their already very good average over the last seven games).