The Pistons are off to a 3-10 start to the season, and much of the team’s struggles can be blamed simply on a lack of offense.

Detroit is middle-of-the-pack defensively, but ranks just 28th in offensive efficiency, and is next to last in team field goal percentage — ahead of only the 0-12 Sixers.

Brandon Jennings believes he knows the reason why.

From David Mayo of MLive.com:

“If you ask the question about why we’re not making shots, we don’t shoot,” Jennings said after Friday’s 99-89 loss to the Atlanta Hawks. “We don’t shoot in practice. We haven’t really had a chance to work on our games or anything. When we do have shootarounds, we’re not able to get up shots like we should.” …

“I just think if you’re going to have shootaround in the morning, I think it’s good that you get loose and you should work on shots that you’re going to take in the game,” he said. “Even before, after practice, we’ve got to start getting in the gym, just working on our game more.”

Stan Van Gundy is in his first season as head coach with the Pistons, so it’s likely he’s spending the limited regular season practice time educating his players on the schemes he wants to run in exchange for extended scrimmaging.

A peek at Detroit’s shot chart for the season shows that they’ve gotten almost half of their attempts right around the rim, which (along with three-point attempts) is the goal of the league’s most efficient offenses. But they’re knocking down only 47.9 percent of those looks, which is more than seven percentage points lower than the league average. 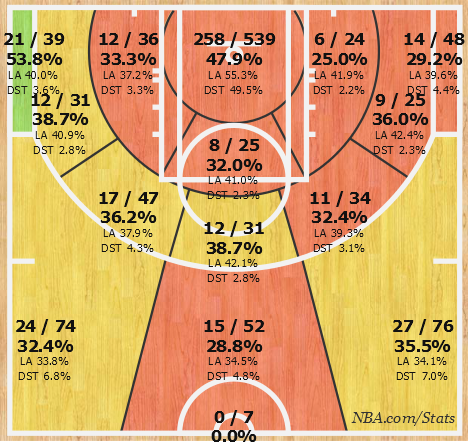 Three of the team’s starters in Andre Drummond, Josh Smith and Kentavious Caldwell-Pope are each shooting below 40 percent individually to this point of the season, however, so Jennings may be on to something.