Kobe Bryant became the all-time leader in missed shots on Tuesday, but that dubious place in the record book wouldn’t be his if not for the other side of that coin.

Bryant, of course, is one of the game’s all-time greats, and along with legends like Kareem Abdul-Jabbar and Michael Jordan, may be one of its greatest scorers.

There’s no question he enjoys taking the bulk of his team’s shots, but at the same time, there have been plenty of instances when there was simply no better option. Bryant detailed some of those when speaking to reporters following Tuesday night’s loss in Memphis.

From Bill Oram of the Orange County Register:

Bryant was asked if, in those 13,421 misses, any particular ones stood out. Meaning, any shots he would really, really like back?

“Yeah, all the ones where I’ve had to bail the team out at the end of the shot clock,” he said. “It annoys the crap out of me. Kills my field goal percentage.”

Bryant may have been joking here, but only to a certain extent.

There have been a veritable ton of Lakers possessions that have ended exactly the way Bryant describes. Passes go in and out of the post, maybe around the perimeter, and then when no teammate ends up with a good look, the ball ends up in Bryant’s hands with a couple of ticks remaining on the shot clock, and he forces one up — often times while heavily contested, and plenty of them coming from well beyond three-point distance.

While we’re here, it feels fitting to include Michael Jordan’s famous quote about missing so many shots in his career, which is imprinted on a wall inside the Jordan Hangar space in West Los Angeles. 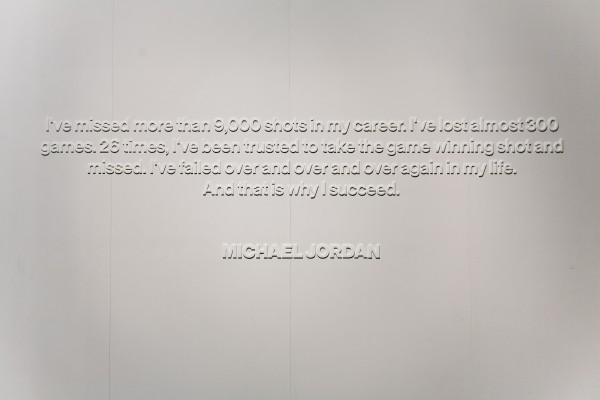